Jackson Howarth, Octopus’ In-House writer here! In this installment of our Spotlight series, I’m delighted to introduce Octopus Energy Services all-star Zoe. I’ve known Zoe for a year now. We first met on a rainy winter’s day, on my front doorstep of all places. I’d been told I was going to be spending a day with Octopus Energy Services (OES) - our talented Octo-Engineers. First, there’d been a knock at the door, and a moment later I was greeted by Zoe, brandishing a pair of electricians boots to keep me safe and insulated, and a fluorescent OES jacket to keep me dry. Over her shoulder, I spied her bright-pink-tentacled Octopus van - my ride for the day.

A day out with Zoe, OES' all-star engineer and trainer 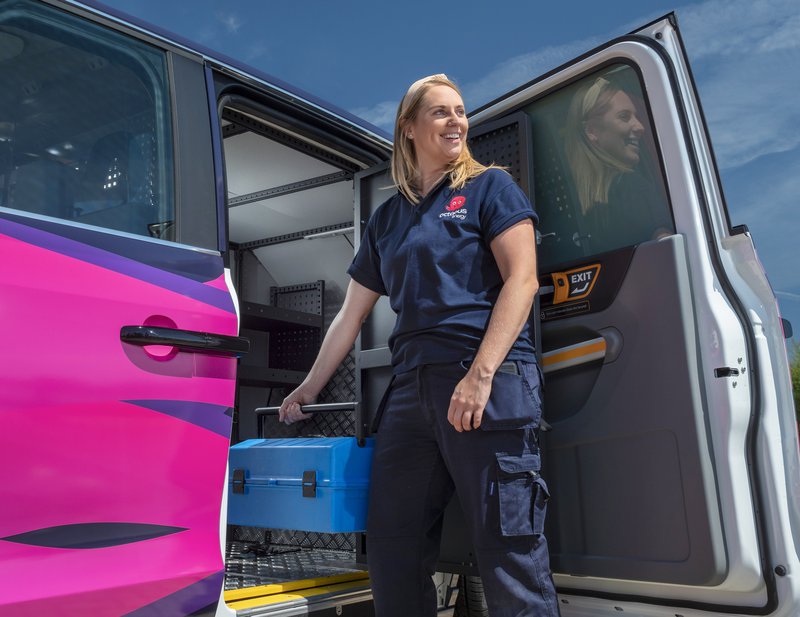 Zoe spent the day showing me the ropes. We drove all over London installing state-of-the-art smart meters, talking green energy with customers and helping out the odd person in a bind. I’d heard that Octopus had created Octopus Energy Services (OES), their very own Octo-engineers, so that they could ensure the same high standards for metering and engineering that Octopus customers expect from the rest of the business. Still, I hadn’t really known what that meant until our day out. Zoe was a tour de-force: warm, professional, and infinitely capable.

Recently, Zoe got in touch to tell me that she had taken on a new role as a Training Coordinator, so I called her to find out more!

Jackson: To kick things off, could you tell us a little more about your story, and how you first came to OES?

Zoe: Well, Octopus places a lot of value on softer skills that aren't traditionally given as much attention as the technical side of things elsewhere in the industry, and before I became a meter engineer, I actually trained as a social worker! My experience in social work - that person-focused approach - is something that I’ve carried with me since. I’ve met people from all sorts of walks of life and I’ve spent a lot of time adapting to very different people in very different situations and finding good ways to communicate. It’s kind of ingrained in me, and I’ve definitely applied it to my work at Octopus.

My experience in social work - that person-focused approach - is something that I’ve carried with me since... It’s kind of ingrained in me, and I’ve definitely applied it to my work at Octopus.

After working as a social worker I wanted a change of scene, and so I spent two and a half years training and working as a meter engineer with another energy supplier. I came to Octopus because it seemed like a people’s company - it was more environmentally friendly and it seemed like it really valued its customers. I thought that would be reflected in the way it valued its staff and it has been 100%, I haven’t been disappointed. After spending the best part of a year on the tools with OES, just after we last saw each other, a new opportunity came up - OES were looking for a training coordinator!

So a lot has happened since we last saw each other! Could you tell me a little more about your new role?

Zoe: Obviously OES is a bit younger than Octopus Energy so we're growing super fast to make OES’ ambitions reality - getting more smart meters on the ground (and soon, other smart tech like EV chargers and heat pumps) as we build a smarter, greener energy grid. I managed to get the role of training coordinator, which is brilliant, because now I’m really involved in the onboarding process with new starters, welcoming them to the company and introducing them to all the things we’re about - the customer service, green energy - I’m really loving my role.

I work really closely with our new Octopus engineers, but we also have contractors who install meters for Octopus. We’re known for being really good at the customer service aspect, and spending that extra time with the customer going the extra mile. And because we’ve had that from when we first joined, everybody at Octopus is on a level. Contractors, on the other hand, are traditionally focused on the installations themselves - and getting as many done as possible. I visit our contractors and give training days with new starters and experienced engineers. I introduce them to who we are as a company and what we’re about. We do a lot of work with the Smart Meter Installation Code of Practice (SMICOP), so they can work to the same standards that our customers expect. A lot of the training focuses on soft skills, so I teach them the processes, and all the engineering we do on the day to day of the job, but also the customer service aspect.

Next week is our first big set of Octopus Energy Services starters to join since the pandemic so I am really looking forward to having our new guys on board. The training process is all in-house, we have them for several weeks (the training for contractors is shorter). To be honest, there’s a different hype. Because of who we are as a company, when you finish your day one, and they’ve learnt a bit about the company that you’re going to be working for, they’re buzzing!

Next week is our first big set of Octopus Energy Services starters to join since the pandemic so I am really looking forward to having our new guys on board. When you finish your day one, and they’ve learnt a bit about the company that you’re going to be working for, they’re buzzing!

Jackson: On our day out together, I remember how you used the IHD as an opportunity to talk to a customer about how they could be smarter and greener with their energy usage. Do you get the impression that OES engineers feel like they are fighting the climate crisis on the ground, is it something you focus on during training?

Zoe: Massively. Especially in recent months. There’s been an increasing focus on it and I've been trying to push that as a highlight of the training. It’s easy to see that our OES engineers are very conscious of why they do what they do - why the installations take place, and we’ve done a fair amount of further training and team briefs to talk in depth about climate issues and how we fit in. We’ve got a new starter course starting next week and I’ll always start by asking ‘why are we installing smart meters?’ Half of the room will know. They get the importance of telling the customer about how a smart meter can help them watch their energy usage, and use energy more efficiently, To begin with there’s also always some who think they’re there to put the meter on the wall. So there’s the training opportunity to explain why we’re doing it. I’m confident that by the end all of our engineers understand the importance of what they’re doing.

It’s easy to see that our OES engineers are very conscious of why they do what they do - why the installations take place, and we’ve done a fair amount of further training and team briefs to talk in depth about climate issues and how we fit in.

Jackson: Everything’s changed with COVID 19, tell me what you’ve been up to?

Zoe: Being the company that we are - with the technology we’ve got under our belt - as much as we’ve been affected, we’ve handled it so well. Throughout lockdown the engineers were only carrying out emergency installations and serious jobs where people were off supply. We’ve been following the infectious and hygiene protocol for customers who have Covid and are self-isolating. 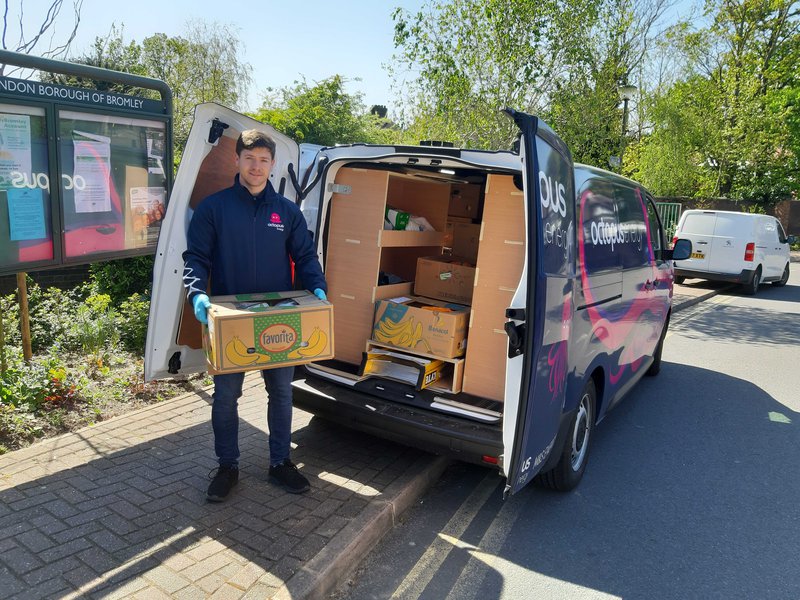 I also helped organise our Covid Volunteers. In the first lockdown 75% of the engineers were out volunteering - most of them for about three or four days a week. It was such a good thing to do - there was such a positive attitude from the engineers. They were just grateful to be able to do something for the community. We had people who had joined us during lockdown and couldn’t begin training, so their first experience was to jump on board with volunteering and we have nothing but positivity. It really helped bring everybody together. We even had some engineers who fell into the vulnerable category and couldn’t go out but still wanted to help, so they spent their time calling customers instead.

It’s a shame because we aimed to get more people from the office on days out like you did! I’ve been working throughout. I started my new role in January. I was working from home and developing the training material, but also the re-mobalisation process - creating a plan for getting the workforce up and running again was quite a significant amount of work!

Jackson: That’s really admirable! I’m going to switch course slightly - I’ve heard that Octopus Energy Services is planning to become a one stop shop for all things smart and green - could you tell me a little more about that? Are you excited? 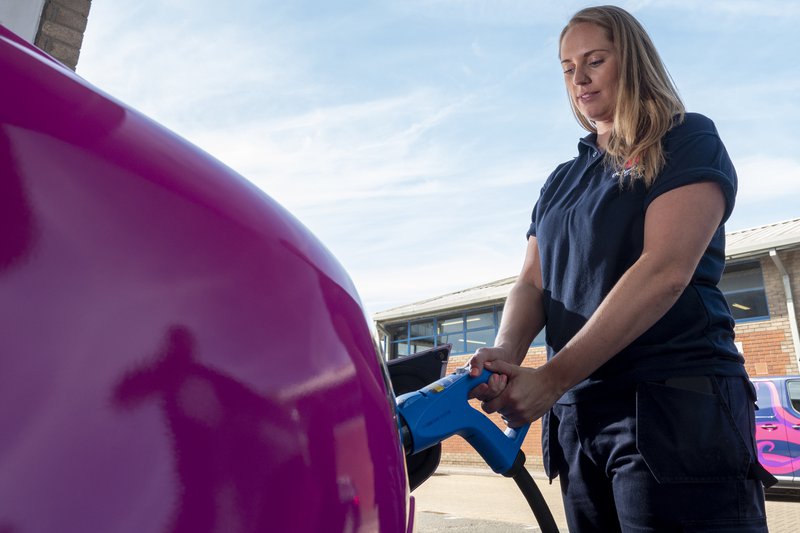 We have a group of engineers who are working with the EV team at the moment. They’ll eventually become mentors who can then train up other engineers, so that’s really exciting. In terms of other green projects, it’s great that OES are beginning to get involved. A lot of people join specifically because they want to expand their skill set and work on exciting new projects, like heat pumps, electric vehicles, smart charging, and home energy storage.

Being a start-up, with all the opportunities and all of the growth, it’s just really awesome to be part of a project that’s moving like this.

Jackson: I saw recently that OES now have some really snazzy looking Electric Vans? What are they like?

I have one of the electric ‘taxi’ van’s with me right now - it was actually my taxi that was brought to the office when the Prime Minister visited! That was so… surreal… 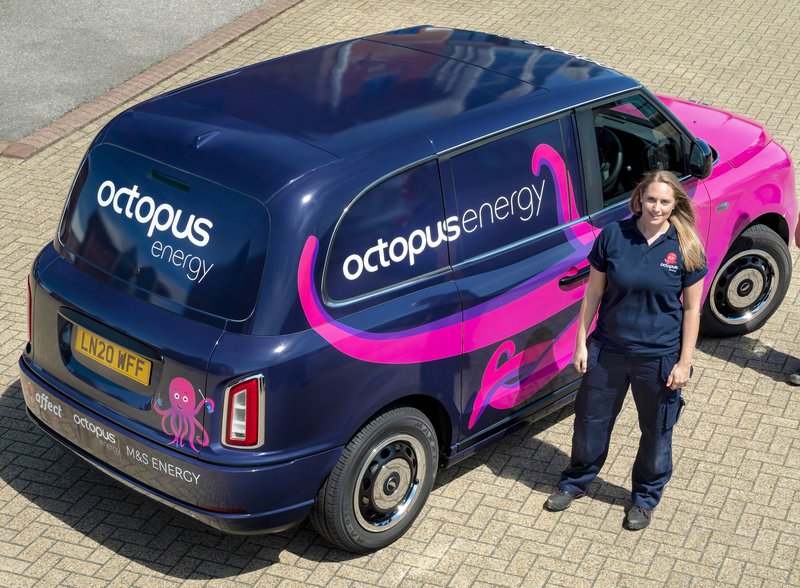 It’s like practicing what you preach. Within a month or two we’ll see all our engineers installing electric vehicles and rolling up in electric vehicles of their own. It drives fantastically, it’s super smooth. I do sometimes get other taxi drivers asking me if I can help them join Uber, and I get to tell them that I work for a green energy company - as if the Octopus Energy Services sticker wasn’t big enough! To be working for a green energy company and driving a green vehicle - especially one that’s got pink tentacles down the side - it’s just brilliant really.

Back to Blog More on Our community More on Careers