At Octopus Energy, we like to find brilliant people and carve out a space that allows them to do what they do best. One such square peg in a round hole is our very own Future Technology Evangelist Phil Steele. You may recognise Phil from our smart home projects and integrations: Amazon's Alexa, IFTTT, Agile, Go and Tesla – some of the most innovative, out of the box experiments in smart energy today. Eugene Costello hears from the man behind our smart office:

Officially Octopus’ ‘Future Technology Evangelist’, Phil Steele is messianic about the role technology has to play in bringing about a sustainable future. He is first and foremost a details man, and loves to roll up his sleeves; at our head office in Soho, he has rigged up a series of lamps that show how carbon intensive London’s energy mix is at any given moment, and another to let us know when the toilets are occupied.

So how would Phil describe his role?

“Well, as Future Technology Evangelist, I’m responsible for the new exciting stuff we’re doing and more importantly, the exciting stuff we could be doing. I seek out new business opportunities at the bleeding edge of tech. I don't see it as a kind of futurologist trying to look ten years ahead, it’s more about what we’re doing in the next six months to two years.”

Phil grew up on a farm in Warwickshire, near Stratford-upon-Avon, before studying Electronic Communication and Computer Engineering at Bradford University. After graduating, he spent nine years at Cellnet (later O2) as a product manager, but his knack for seeking out cutting-edge technology goes back much further

In the five years followed, Phil moved to France and decided to launch a start-up looking at smart-home tech: “I did so because, before university one of the things that I did at home (when not driving tractors) was attempting to automate my own room. I made a door sensor, with a ruler under the carpet, a little microswitch and a motor. As you walked in and stood on the ruler - you pushed a microswitch which turned the motor, activated another switch, and turned everything on or off.”

Now we know where the toilet API came from...

“In France, I started researching smart-home tech and found nothing, really. There were bits - a sensor here and a smart plug there, but nothing putting it all together. So I set about doing just that - creating a kind of intelligent smart home.” He eventually founded a start-up to perfect the central command aspect, and called it nCube. Phil was soon able to go full-time, and nCube was accepted onto the Wayra Accelerator Programme, Telefonica’s start-up accelerator.”

“I started to grow the team, making sales and connections and all the rest of it. We rebranded; got plastic cases designed for the product, so the In-Home Device came in a nice blue case, and we started winning design awards.”

In May 2018, Octopus Energy ran a smart energy hack-day so that people could experiment with our agile tariff. Phil was invited along and became “hooked on the Octopus story”. He started talking to founder Greg Jackson, director of product and marketing Rebecca Dibb-Simkin and chief technical officer James Eddison, about what he and nCube were doing. They invited him to come in for a chat and now Phil seems as happy as a seagull with a stolen chip.

there’s some really interesting automation and connection that can be done with smart products in the energy industry.

“One of the first things that I did here was to get the IFTTT integration done, which means that smart thermostats and heating systems can be connected to time-of-use tariffs, and work automatically when energy is cheapest and greenest. We then hooked up Alexa, so you can ask Alexa: what's the price of energy? How much did I consume? How green is the grid at the moment? This set us down this path of saying, actually there’s some really interesting automation and connection that can be done with smart products in the energy industry.”

“I mapped out what we’ve ended up calling Smart Energy. If you’ve got electric heating, solar panels, battery systems and so on, you can now optimise everything in such a way that you get your energy bills pretty low and you can get paid to export back to the grid as well.”

As Phil explains, all these smaller partnerships and experiments ultimately add up to a much bigger, more comprehensive picture – smart energy. We’ve drawn up a diagram to help: 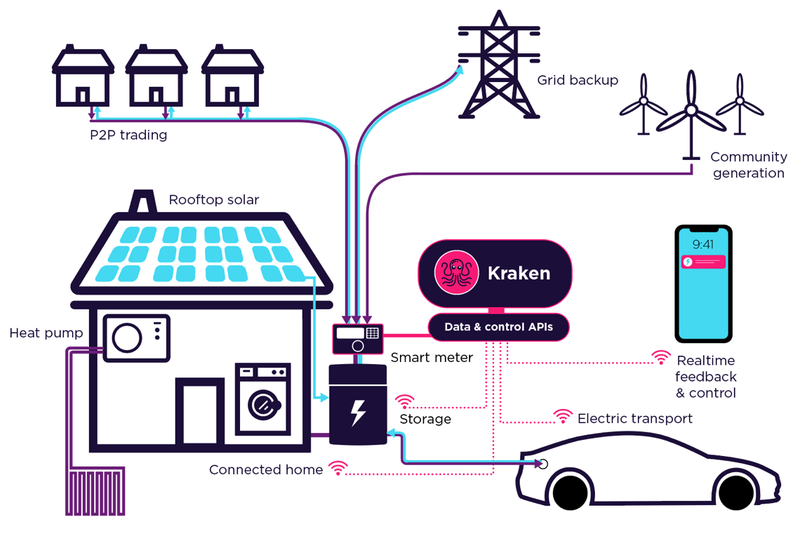 As Phil explains, “we need to try and get this technology into tens of thousands of homes,” and so he’s been given four things to focus on. “The first concerns everything to do with smart tariffs; so I took on the Export Tariff at the beginning of April and made that happen. The second is the commercialisation of smart energy; how do we make that innovation work on a really large scale? Third, I am working with partners on integrating and promoting more connected energy appliances and systems. The fourth is for me to become a kind of entrepreneurial hub for everything that is going on in the industry, and being super visible and all of that.”

There is still a lot to do, but piece by piece, with Phil’s help, we are building the energy system of the future, today.

Want to hear more about what Phil's up to?

Head to his blog