Powerful climate murals painted across the UK for COP26

In the run-up to COP26 – a pivotal moment in humanity's fight for the climate – the eyes of the world are on the UK. We decided to show world leaders just how much citizens care about fighting for this planet's future, through murals calling attention to local biodiversity loss.

View climate murals around the UK

We teamed up with Imperial College's Grantham Institute and UK Youth for Nature to celebrate local wildlife in environmental murals in seven cities.

We enlisted the help of young people to create works of art inspired by local endangered species – then, talented local muralists brought seven of the works to life on real murals across the UK.

Check out these murals, amplifying important climate messages from the next generation, below.

Click to read more about each city's mural and the young person whose art inspired it. 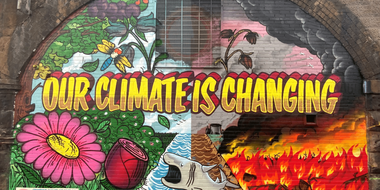 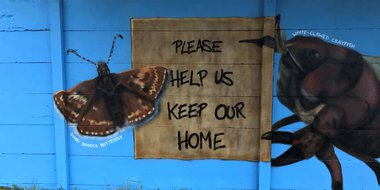 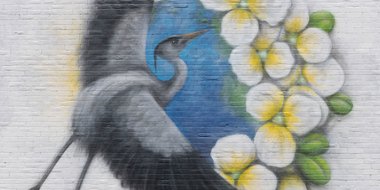 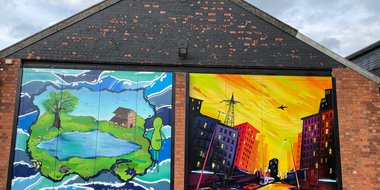 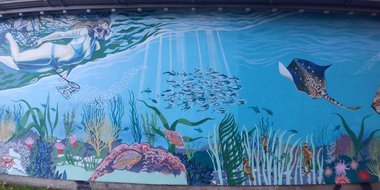 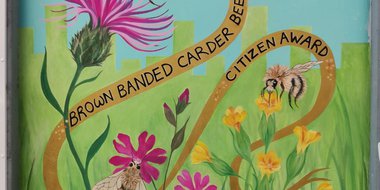 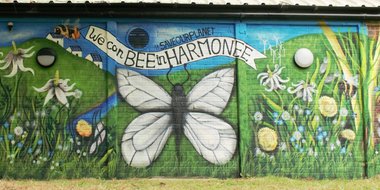 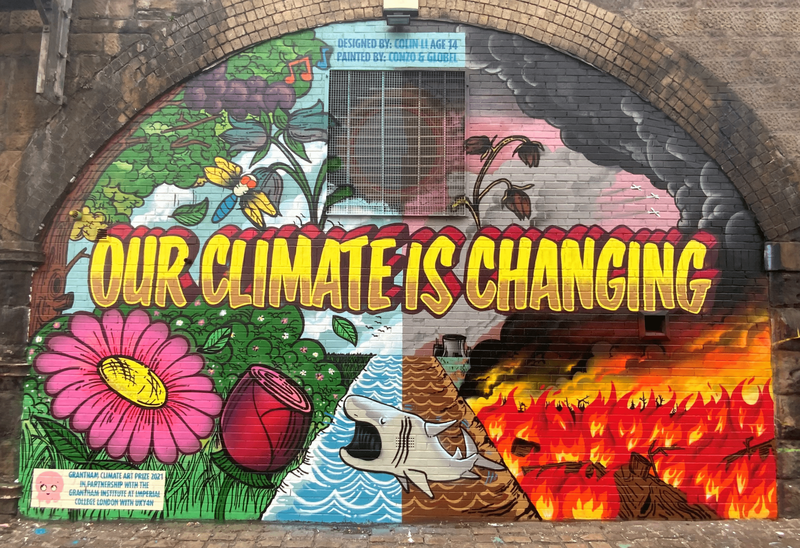 Their thought provoking mural was inspired by artwork by Colin, 14 from Glasgow 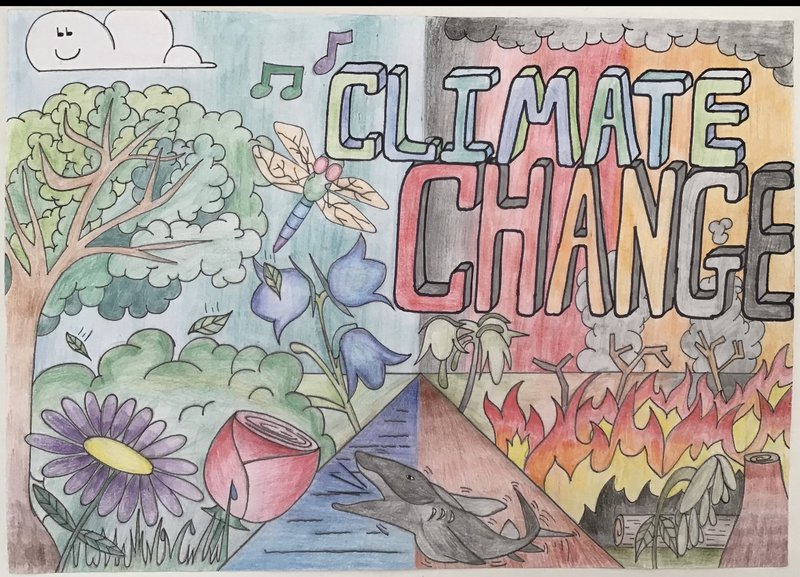 "I’ve really enjoyed taking part in the competition because I love being creative and innovative.

I wanted to make a design that is eye-catching and informative. The issue of climate change is so important to me because if you don’t take care of our world, it won’t be a better place for us all. It is really important to use mural art to convey a message about the climate crisis and species loss so the public know what is really happening to the world now, which will hopefully make them think about it. It is vital that young people’s voices are heard so we can make changes if we listen to them." 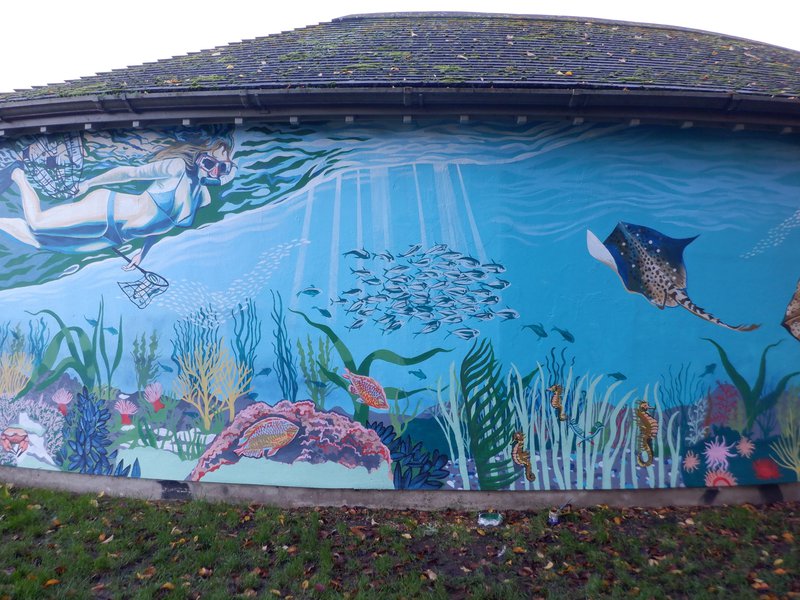 Charlie's eye-catching mural was inspired by artwork by Julia, 18 from Basildon 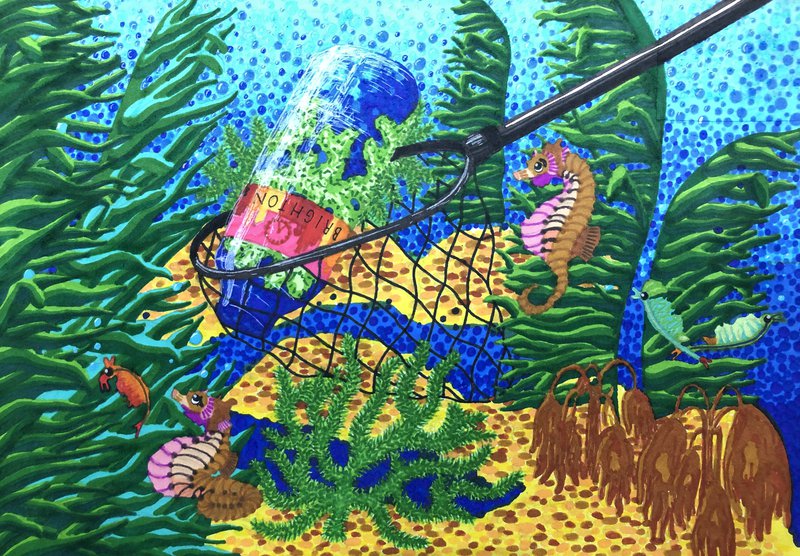 "I’ve really enjoyed taking part in the competition because it provided an opportunity for young people to express their thoughts on climate change.

It is vital to allow our generation to have a say in how our future will look, but unfortunately, young people’s voices aren’t always shared. This competition gave us a platform to speak out about the climate crisis and its impact on biodiversity. Mural art provides universal messages, so it’s a great way to raise public awareness. I hope that with these murals, people will realise how big an impact they have on the way we shape our environment, and I hope the public will help to conserve this planet for future generations."

Anna's beautiful mural was inspired by artwork by Kirsty, 22 from Nottingham

"I cannot describe how much I have enjoyed this experience! I still don't think it's fully sunk in that I've won. It's such an amazing opportunity to help spread awareness of climate change, which is something I'm really passionate about.

I took part in this competition as I want my voice to be heard. It’s vital to show everyone how to look after the planet and to show people that we can coexist with nature if we’re mindful of our actions. Everyone needs to take action now so we can all combat climate change together. From fast fashion to food waste, we are damaging the planet, and having eye-catching murals to make people aware is one of the ways we can collectively move forward. We can save the planet." 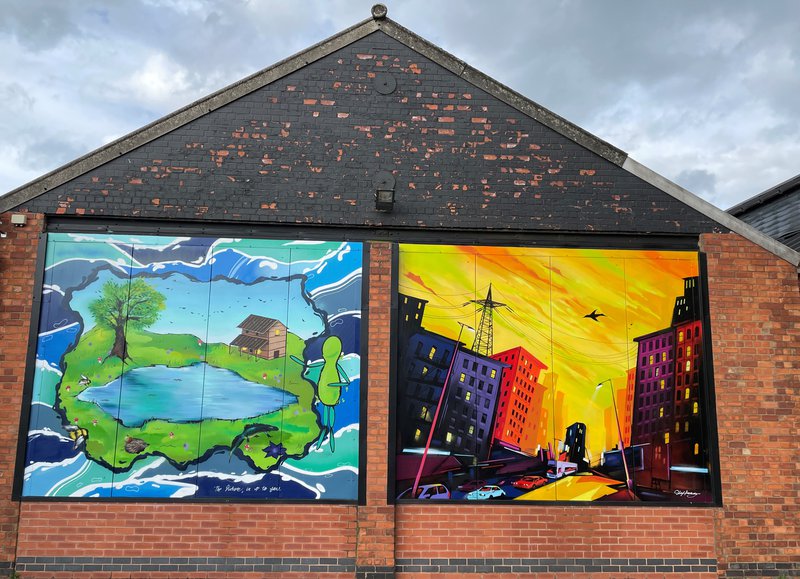 Wing's striking mural was inspired by artwork by Stephany, 25 from Manchester 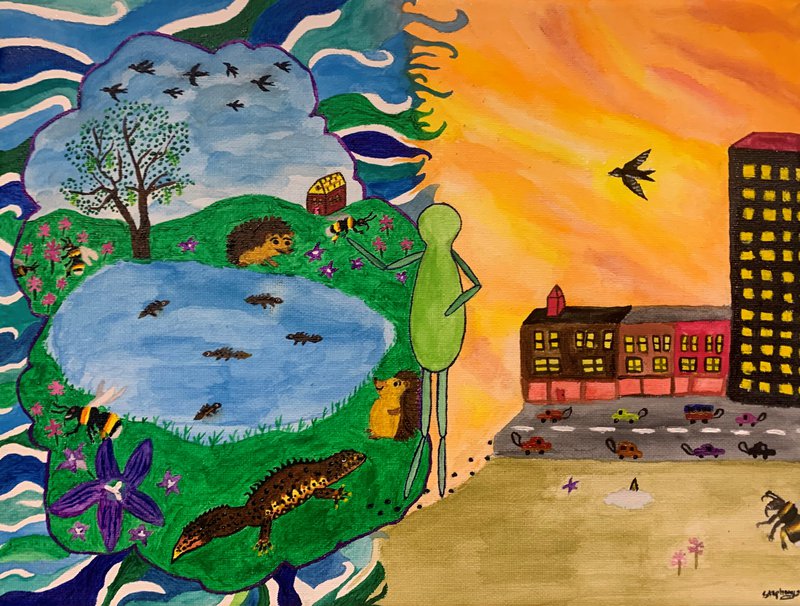 “I really enjoyed participating in this competition and I learnt a lot about the species that are at risk in Leicester.

I think it is a great idea to paint a mural that raises awareness of the current climate crisis and species loss for the public to see. If people don't know what’s going on, they won't realise what they’re missing out on, or what they could have. If you observe nature, you can learn a lot from it. I have hope for the future and I think the planet will become even more beautiful than it is now.” 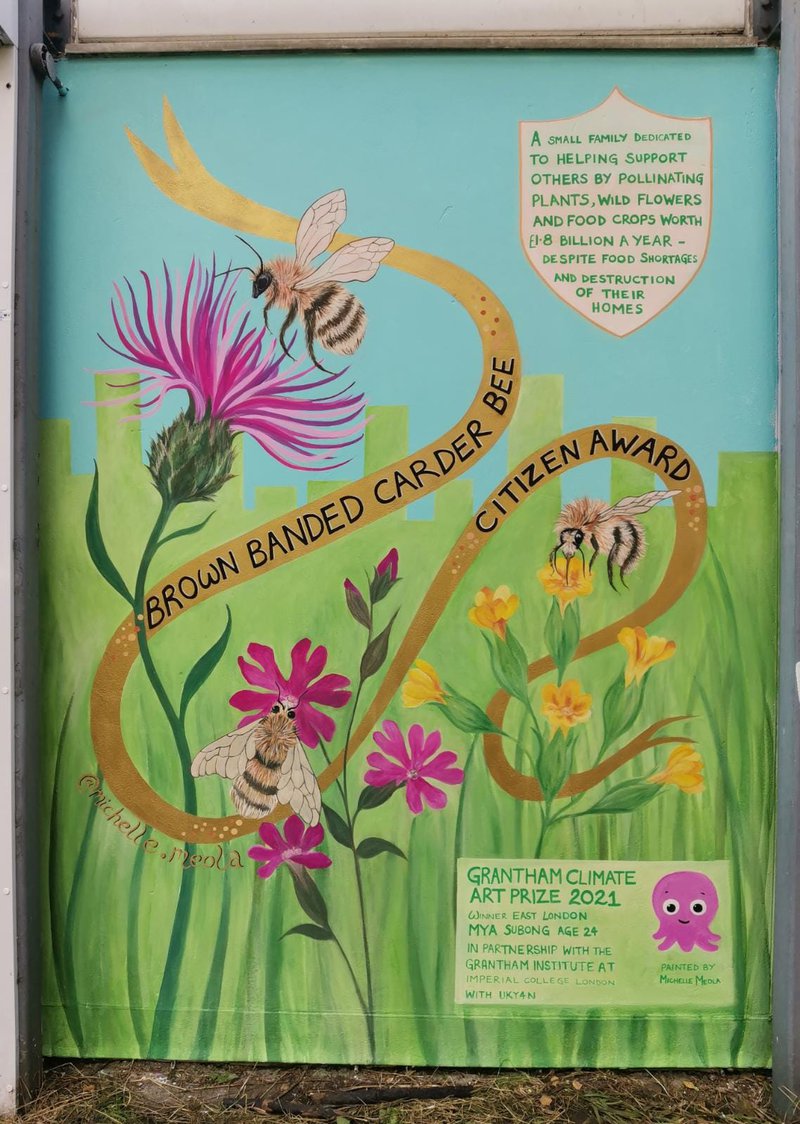 Michelle's unique mural was inspired by artwork by Mya, 24 from Milton Keynes 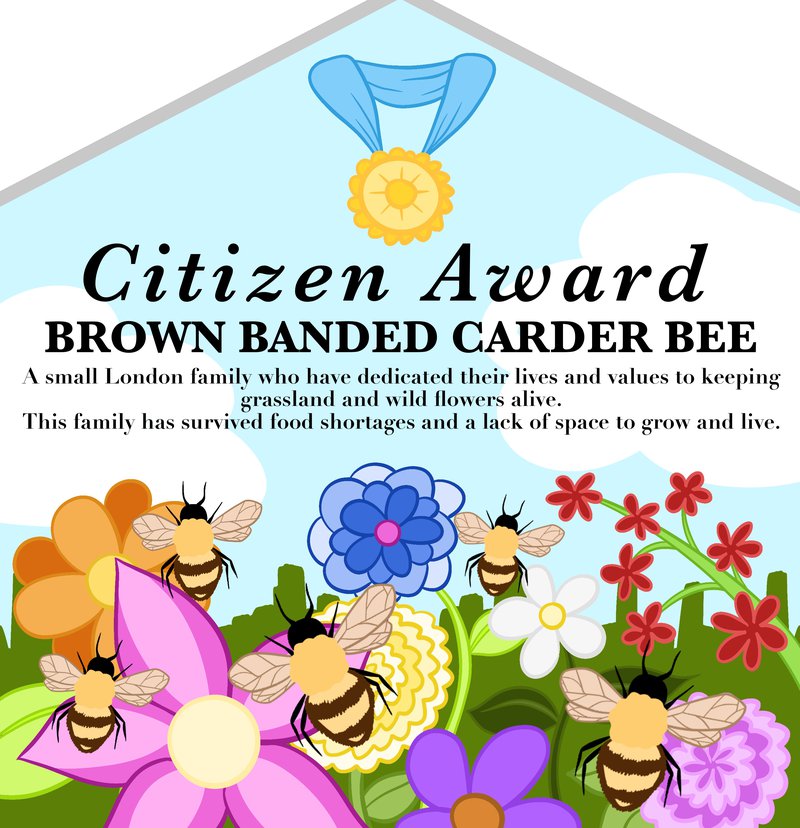 “I found the competitions through looking for inspiration to draw (I am a graphic designer professionally), it was very exciting when I received the call telling me I had won.

It was interesting learning about the different species that live in Rochdale and around the country that I didn't know existed. I try my best to be conscious of what I do and how I impact the world around me. Climate change is on my (and my friends and family's) mind a lot more now than it was years ago. We all know there's an impact from each individual and I do feel that the more people are aware and genuinely care, we can make big changes at greater levels." 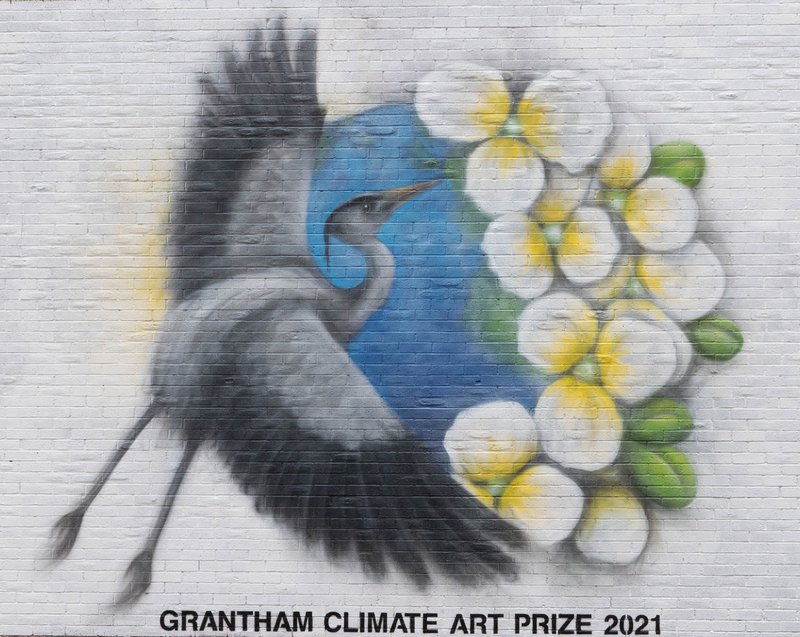 Bushra's impactful mural was inspired by artwork by Mayokun, 15 from Rochdale 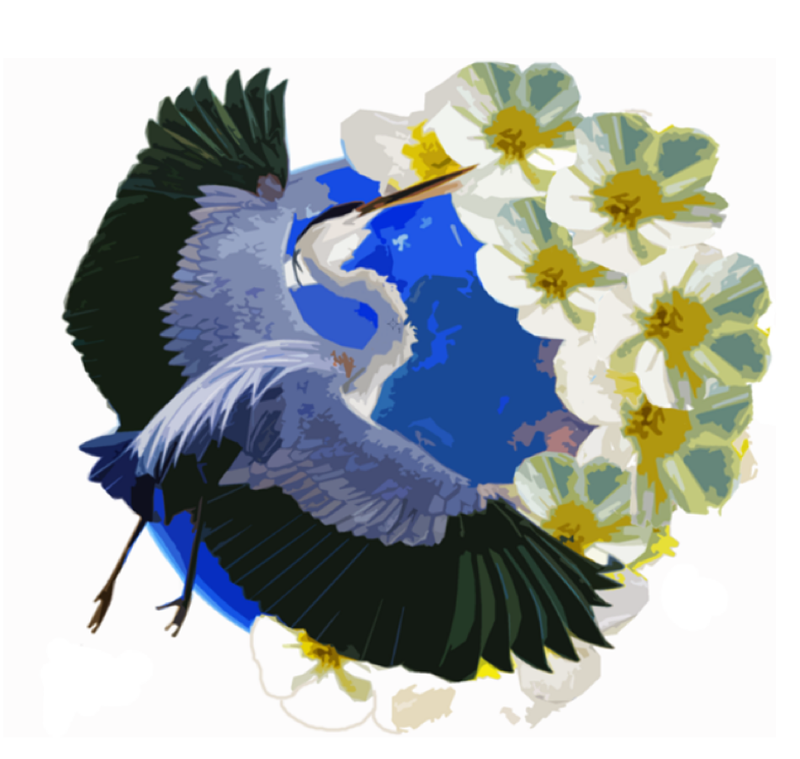 “It's been quite surreal seeing my design in the town centre where anyone can see it. My friends have been sending me pictures of the mural as it progressed.

I entered the competition because I wanted to help raise awareness about what was happening to our local environment. The fact that the competition was for young people also appealed to me, as often it feels as though young people (despite being strong advocates for solving the climate crisis) are left out of important conversations that’ll inevitably affect their futures. It is vital for young people to be heard, especially regarding the climate crisis, because if it’s not dealt with now, we, the younger generation, will be left behind with an Earth too far gone to be helped. This competition has urged me to think consciously and critically about how actions I make without thought could affect the biodiversity around me." 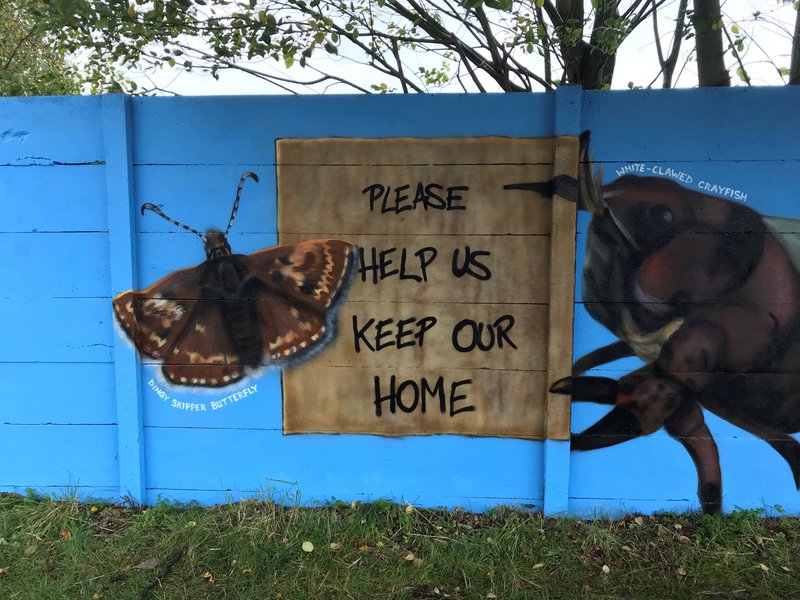 Grega's fantastic mural was inspired by artwork by Jasmine, 23 from Newbury 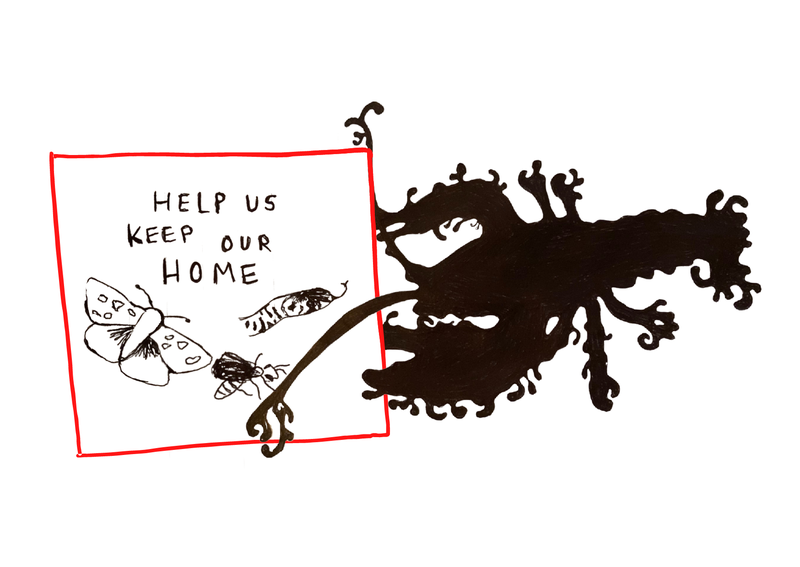 "This was the first art competition I’ve ever entered, so it was very exciting to be a part of it. As my first competition, I was also very surprised to be selected as a winner!

Knowing just how important the climate crisis is, and how critical it is to act fast, when I came across this competition I was immediately drawn to it. Including young people in the climate conversation should be common practice. We’re the upcoming workforce, voters, families, and consumers. The climate emergency impacts every aspect of our future, and we should get to have a say on the way that future will pan out. One of the issues with the climate crisis is that the general population is not wholly aware of how bad the situation really is. So, anything that can be done to bring the climate crisis message closer to the everyday person, such as a mural in a public area, is really important. I am hopeful that we can still reduce the impact we humans are having and we can help the planet heal some of its wounds."

We at Octopus want to say a huge thank you to everyone who took part in the Grantham Climate Art Prize, and a massive congratulations to the 7 amazing winners who have provided a message of hope that we can heal our planet if we all take action against climate change!

And also a special thank you to the mural artists and to our partners who worked with us on delivering this competition: Grantham Institute - Climate Change and the Environment at Imperial College London, the Natural History Museum’s Real World Science network and UK Youth for Nature. 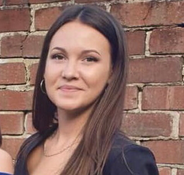