How you know we're here to stay

This blog is more than a year old.

For the latest, head to our Feb 2022 blog Octopus Energy: Built to Last.

In 2018, after several small energy suppliers went under, we wrote about what to look out for in a supplier that's at risk of going bust. Read on for that, as well as a bit about how our unique business model and sound backing mean we're here to stay.

.@OctopusEnergy CEO Greg Jackson says there will be 'no interruption' to domestic supplies in the current energy crisis and people won't be 'held to ransom'pic.twitter.com/VIAc8KtnFz

As one of the largest, best backed, best run companies in the sector, we will do all we can to support consumers, government and Ofgem as they work through this.

Over the last 5 years, we've grown to over 3 million customers, expanded globally into the US, Germany, New Zealand, Japan and Australia. Our tech platform, Kraken, is world-leading and licensed to support 25 million customers worldwide. Our business model speaks for itself: despite the pandemic, we are Which? recommended for the 4th year in a row (something that has never been done before), we were named USwitch energy supplier of the year, we're National Technology's 'Tech Company of the Year', and were named 'Company of the Year' by the Renewable Energy Association for the second year running. What's more, we recently announced a major partnership with Generation Investment Management, a sustainable investment fund founded by former US Vice President, Al Gore.

If a deal looks too good to be true, it probably is

This isn't the first time we've seen lots of smaller energy companies go bust. Back in 2018, eight energy suppliers ceased trading and Ofgem asked us to take on the customers of Iresa and Gen4U. Other prominent ones included Extra Energy, Spark Energy, Usio Energy, and Future Energy. Over the last few years, several more companies have followed and most recently Utility Point and People's Energy have folded.

Why are these companies going under?

Small energy suppliers often enter the market and pick up customers by offering dirt-cheap energy tariffs. Consumers paying extortionate rates with major Big 6 suppliers are then swayed into switching, because – it’s all the same energy coming out down the wires, right?

Unfortunately, these tariffs are often too good to be true.

These suppliers are selling energy to customers for less than they paid for it on the wholesale market. While this can mean they’re able to offer cheap energy in the short term, in the long term, they won’t be able to cover the costs of running a successful, honest business.

One of two things will happen:

We insist upon fair and sustainable pricing. We charge our customers based on the wholesale price of energy, with a target 5% margin on top to cover the costs of running a successful business. 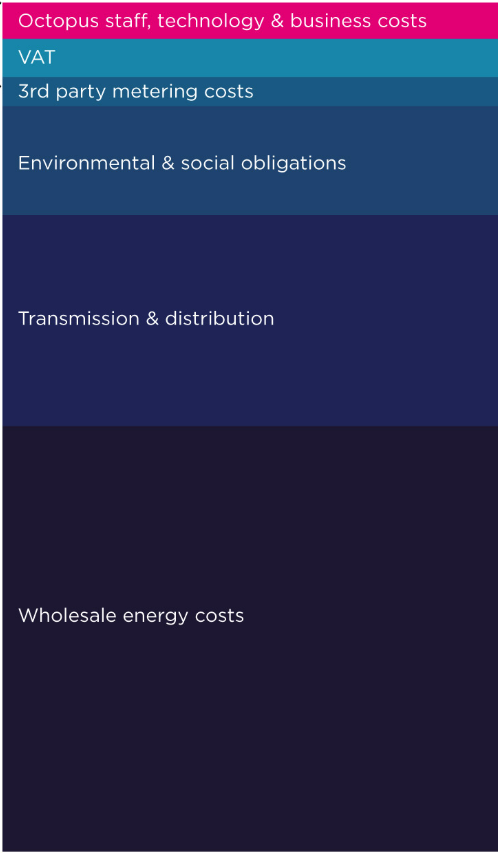 The wholesale cost of the energy you use makes up a little under half of your energy costs. The rest is made up of transmission and distribution costs, environmental and social obligations and VAT.

The blue sections are the bare minimum needed to run a business – and that’s not even including the cost of paying staff!

The pink section at the top is the secret sauce, the money that we invest in making sure our customers have the very best service, our staff are happy and that we're continuously able to innovate our tech to push the industry forward. It's the money we will always spend to make us a company you want to be a part of.

The prices these newer energy suppliers offer simply can’t cover all of these costs, and the recent wholesale gas price increases have been the final straw for some.

This kind of honesty is rare in the energy industry. Our company was founded to demand transparency of the Big 6, whose track record on that is pretty atrocious.

Back in 2018, following several energy companies folding, we sent our customers an email in which we asked customers to tell us what they felt a fair profit margin was. The average they told us was 7.5%. At Octopus Energy we're well under that, at less that 5%.

'Independent research firm Lazarus Research, in their analysis of Big 6 profits, found they charge an average of 22.6% on top of the cost of supply...

This is obviously excessive, demonstrating both greed and inefficiency. And because that number is spread between loss-leading cheap deals and overpriced standard variable tariffs, a lot of people end up paying far more to subsidise the cheap deals of the few.

So I'd like to know - what do you think is a fair and reasonable amount for us to charge for managing your energy supply. Simply click an option below to let me know.

We've also put our transparency into practice: like our innovative Octopus Tracker tariff, offering fair daily rates based on the wholesale price of energy, with a precise breakdown of exactly where your money is going.

Pushing for the Price Cap

Here's our CEO Greg presenting evidence in favour of capping energy tariff prices before the bill committee in Parliament (it later passed and became the Domestic Gas and Electricity (Tariff Cap) Act 2018.) Watch him fighting for the cap here. 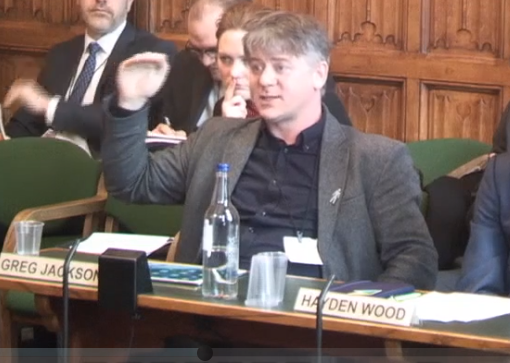 This means that we insist upon transparency in our own pricing, too. We won’t promise to always offer the cheapest tariff on the market, because we know that the costs of running a good business can’t be compromised on. We differ from these smaller companies because we won’t sacrifice our business, or our staff or customers’ happiness, to offer dirt-cheap prices. They will. With eight energy companies having ceased trading in 2018 alone, it’s pretty well-documented that this model is unsustainable.

Long story, short: if a deal looks too good to be true, it probably is.

Backed by the big guys, so we’re free to keep doing what we do best

Octopus Energy has the best of both worlds – the tech and vision of a startup; and the security of being backed by a major investors.

Stage 1 of our journey has been powered entirely by our eponymous backers, Octopus Group. This propelled us to 1.5m domestic customers in the UK across Octopus Energy, M&S Energy, Affect Energy, London Power, Co-op Energy and Tesla Power, and over 12,000 business customers on innovative proprietary energy solutions with Octopus Energy Business, including Arsenal and the National Space Centre.

A large portion of Octopus Energy is still owned by Octopus Group, who run a number of investment funds, including £3.4bn in renewable energy generation. Their incredible solar investment actually makes them the UK’s largest investor in onshore solar (meaning, panels that aren’t on roofs, or on the sea). Over £2 billion has already been invested in Octopus Group’s energy mission so far, and our crucial relationship with them remains a really strong one.

Investment from Origin and Tokyo Gas

In early 2020, Stage 2 of Octopus Energy’s mission to make the green energy transition cleaner and cheaper saw major investment from Australian Energy company Origin. Origin's backing also saw us valued as one of those rare beasts - a tech 'unicorn', and is already powering our growth into new markets, helping us build more tech to make energy greener, and increasing our investment in service and growth in our existing markets (the UK and Germany).

As 2020 drew to a close (and we neared 2 million customers) we were delighted to announce that Tokyo Gas, one of Japan’s most respected utilities, with 135 years of heritage, was partnering with Octopus to launch Octopus Energy in Japan. On top of that, Tokyo Gas have invested $200m for a 9.7% stake in Octopus Energy Group to help drive our green energy revolution.

It's worth remembering that besides Octopus Group, Origin and Tokyo Gas, the rest of Octopus Energy is owned by our team! (Really. Every Octopus Energy employee is a shareholder).

In short the combination of long-term, good value pricing, and the sound backing of major technology investors means Octopus Energy isn't going anywhere - we’re on the way up.