Switch up green levies for a smarter, cleaner energy system

With energy costs going up, the energy crisis has brought new attention to all the smaller costs that make up your electricity bill, including green levies. Green Levies are charged on any energy consumed by homes and businesses and make up roughly £100 of the average person’s annual electricity bill. The money recovered from these levies is used to support subsidy schemes for renewable generators. These subsidies have provided (and continue to provide) huge benefits for consumers by bringing forward lots of cheap wind and solar power, however there are different options for how we recover the costs.

Taking green levies out of customers’ bills and including them in ‘general taxation’ would bring a wide range of benefits, while also helping with ‘rebalancing the costs placed on energy bills away from electricity users’ - a commitment laid out in the Government’s Energy Security Strategy. Crucially, it would also provide a boost to green smart tech (namely bi-directional technologies like home batteries and Vehicle to Grid Charging). These technologies are key to unlocking energy flexibility, which is vital for making renewables work on a large scale, and lowers energy costs for all consumers.

The current levy setup is holding back flexible technologies

The case for moving these taxes has generally centred around providing a type of energy bill relief, but there are other benefits too. Currently, having these additional charges on electricity - as opposed to gas - disincentives greener electric heating, like heat pumps and electric vehicles, making them more expensive to run. Both are more than good enough reasons for moving these taxes off from electricity bills, but that’s not all.

Import levies are also a thorn in the side of flexible technologies, which are designed to help us make the most of green energy when it is abundant. As it stands, existing green levies (such as CfD, RO, and FiT) are applied, flat across the day, as a charge based on the volume of electricity consumed. Because these taxes are only applied to imported electricity, they create a difference between the price of consuming electricity and the price of exporting it back to the grid.

These green levies (which add up to around 3.2p/kWh, or £32/MWh), along with other taxes that only apply to imported volumes (eg BSUOS, Elexon charges, VAT), mean electricity suppliers are exposed to a fundamental difference in import and export prices, with the latter sitting at 7.5p/kWh (that’s a ¼ of the total import price). 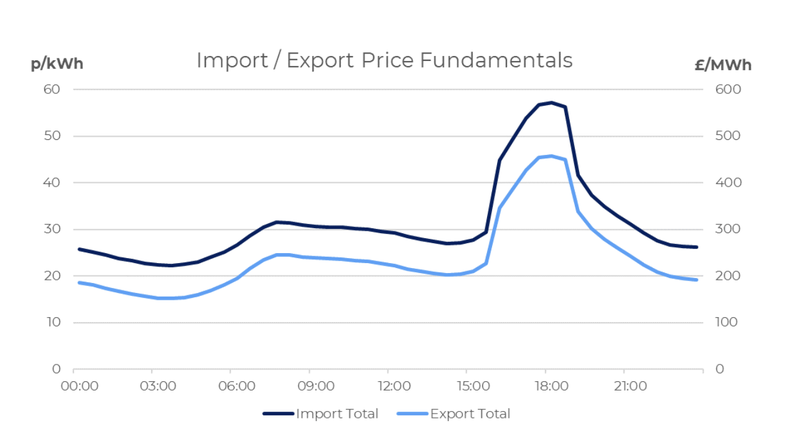 "When it comes to Vehicle to Grid Charging, we see that customers are essentially charged twice, reducing the benefit by roughly £75 annually"

To quickly explain, a V2G charger is capable of charging an electric vehicle up, but also discharging energy from the vehicle back to the grid, in exchange for payment, turning electric cars into a decentralised energy storage network! 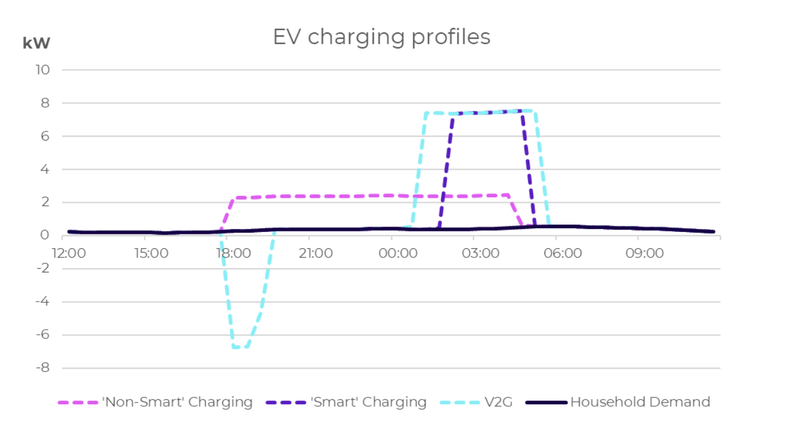 Let’s say the car battery has a capacity of 40kWh and will typically return home with plenty of charge left in the battery, say 20kWh. This V2G car could discharge some of the remaining energy in its battery, say 10 kWh, because there’s more than enough time overnight for the car to charge up to full for the morning, when it’s needed. We can compare different charging strategies for this car considering the price profiles in the graph to the right:

The first thing to note is that typical household consumption is under 1kW during the evening (so whenever we are discharging the car a small portion goes to running the house, but most of this energy is exported back to the grid).

We can compare the cost of charging in each of the scenarios outlined in the graph above. Because the cost of importing electricity from the grid is so much higher at ‘peak times’ you can still save lots of money by delaying your charge until night time in the V2G scenario. What’s more, you can make more money by discharging energy from the vehicle back to the grid as soon as you get home - during ‘peak times’ - even if that means you’ve got to charge up more overnight (which can mean a slightly less efficient charge).

By exporting energy during peak times (and providing other high value services) V2G is able to provide significant system benefits over ‘smart’ charging, displacing the need for dirty fossil generation, providing back-up power for renewables and enabling more efficient usage of the network.

Now let's see what happens when we remove the 3.2 p/kWh green levies (while still leaving the other import levies in place). 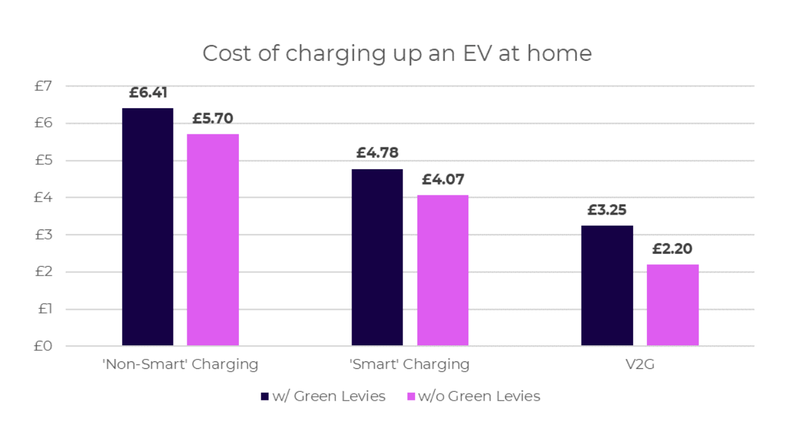 We can see it reduces the cost in each scenario but has the greatest impact for V2G. This is because when an EV owner exports energy and recharges later on, the levies are effectively paid for twice. In the breakdown below we can see how the cost of charging is reduced by making use of cheaper wholesale prices and avoiding other taxes on the bill (e.g. network charges at peak times). However, in the V2G case double charging of green levies reduces the benefit by 32p (roughly £75 annually).

Effectively, we find that import levies provide a sizable disincentive against using storage technologies (like V2G, or residential batteries) to sell electricity back to the grid.

Regardless of whether you believe electricity users should pay for the subsidies to electricity generators, this is undeniably an unhelpful market distortion (the same argument could be made for other levies applied just on import).

At the national transmission level there’s no difference at all between reducing consumption within your home or selling more back to the grid and so both should be incentivised equally. In fact, Ofgem changed the rules to stop double-charging for large batteries, but the issue still remains for residential assets, like smart home batteries and electric cars.

So what should we do to fix this?

V2G is a technology solution which seems to help solve all areas of the energy trilemma: increasing security and enabling decarbonisation by providing grid flexibility. It also does so while costing less than nearly all alternatives, because it makes use of batteries built for another application. Crucially, this V2G is also one the most rapidly scalable flexibility solutions, requiring no subsidies; all we need are the correct market arrangements to ensure EVs help drive decarbonisation, rather than working against it. The technology we need to make this happen is ready now (find out more about our Intelligent Octopus tariff, designed to help EV drivers make use of cheaper, greener off-peak energy), so moving green levies to general taxation must be a high priority for the upcoming energy bill. 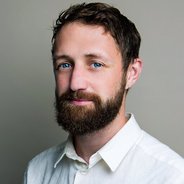 ×Close window
Octopus Energy The only energy supplier Which? has recommended 5 years in a row Rated 5 / 5 based on 120649 reviews. | Review us