Donating to WWF after Earth Hour

“The Earth was small, light blue, and so touchingly alone, our home that must be defended like a holy relic.

The Earth was absolutely round.

I believe I never knew what the word round meant until I saw Earth from space.”

Back on the 30th March of this year, Earth Hour saw businesses, cities and individuals in more than 180 countries across the planet switch off their lights for one hour to help save resources on this beautiful planet.

At the very heart of Octopus Energy’s mission is to wean people off fossil fuels, including petrol and oil, and embrace a future that is wholly renewable and sustainable – clean, green and lean.

So we made a pledge back then. For every single one of our smart meter customers that accepted our challenge to cut their electricity consumption by 50% during Earth Hour, we undertook to donate £5 to the World Wildlife Fund, which does such sterling work as custodians of our planet.

The take-up was exceptional, and we are delighted to say that a whopping 1,120 of you successfully met our challenge! It led to conversations on social media in which people were suggesting ways in which this might be done. Ideas included not using dishwashers and washing machines during that hour, as well as turning off all lights except in one room. A hardy few of you even went so far as switching off the main fuse box for the authentic 1970s experience of playing board games by candlelight during the regular power cuts of that decade.

So a huge well done and thank you to all of you! 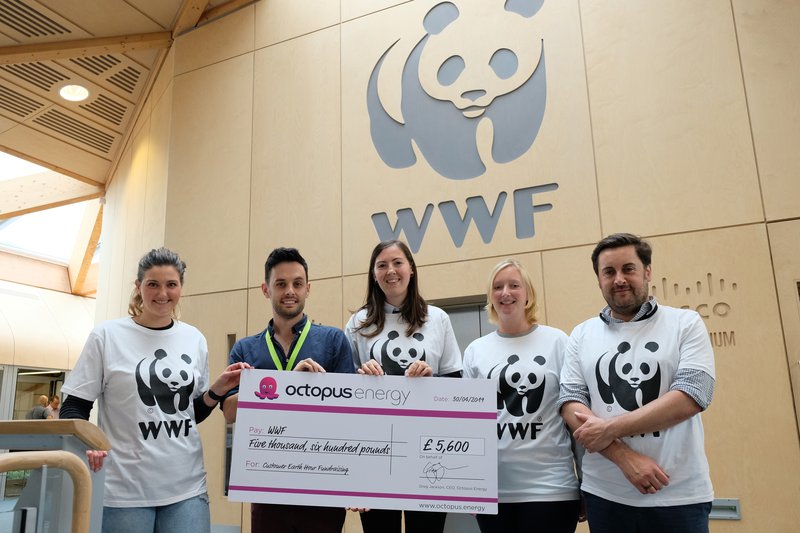 This has been just one of the exciting ways in which smart meters can help us innovate. With actual consumption and impact on the grid measured in half-hour slots we can see individual peak usage times. This helps us build tariffs to fit customer lifestyles and advise customers how to lower their costs.

To read what our founder and CEO Greg Jackson has to say about the smart meter rollout, click here.

That meant that this week, Octopus’s digital marketing messiah (pictured – the one with the beard) headed down to WWF base The Living Planet Centre opened by Sir David Attenborough in 2013 and located in Woking, appropriately enough since he is “woke”, to hand over a comedy huge cheque, Postcode Lottery-style, to the good people of WWF for a cool £5,600.

While there, Max took the chance to see for himself what has been described as “one of the greenest buildings in the UK” - read about it here. Everything from the Interface Neteffect carpet to the diagrid roof is working to lower the carbon footprint and the IT server room kit was all donated and refurbished from the London 2012 Olympics.

WWF, as part of its drive to realise a cleaner and greener future, works with The Big Clean Switch, which encourages people to switch to green energy companies such as Octopus Energy as one simple way you can save money, and help save the planet, too.

We’re delighted to donate to visionary organisations such as WWF. Because we believe energy shouldn’t cost the Earth...

Octopus Director of Product and Marketing Rebecca Dibb-Simkin says, “We are thrilled to be able to hand over a large (literally) cheque to WWF, who do such great work in highlighting the finite nature of our planet and its resources. It shows that Octopus customers are engaged and ethical, and wholly supportive of our vision of building a clean, green, sustainable future, which is in our DNA.”

“As we got further and further away, it [the Earth] diminished in size. Finally it shrank to the size of a marble, the most beautiful you can imagine.

That beautiful, warm, living object looked so fragile, so delicate, that if you touched it with a finger it would crumble and fall apart. Seeing this has to change a man.”