Since launching as a separate entity in January 2018, Octopus for Business has grown dramatically. We spoke to Zoisa North-Bond, Director of Octopus Energy for Business, for a catch-up and potted history of this dynamic division that is seriously punching above its weight…

After a solid stint in marketing and PR, she moved into communications and public affairs for Eneco UK, a subsidiary of Dutch leading renewable energy utility supplier Eneco, with a large asset portfolio of wind and solar farms. From this senior role, after three years she was made managing director.

“While I loved my job,” says Zoisa, “working exclusively with corporate clients was more like being an asset manager with a portfolio to balance. Our client range was large I&Cs (industrial and commercial) such as Unilever and Mars.

“While I loved the challenge of my job, I felt somehow disconnected from what I was trying to achieve.”

What does she mean by that, I ask.

“Well, ostensibly we were selling renewable energy straight from wind and solar farms that we owned, which made me feel good. But the reality was that, while Unilever and Mars paid fair prices for their energy, there were many large companies with exceptionally good buyers so sometimes we would sign them up on long-term contracts whereby our margins were actually negative. This meant that these rich companies were effectively being subsidised by domestic users, often in low-income households. And that didn’t sit well with me.”

“Well, towards the end of 2017 I came across Octopus Energy, which I hadn’t heard of, and their messaging about ‘giving power back to the people’ really energised and enthused me. I thought I could have a conversation with Greg [Jackson, Octopus Energy founder and CEO] so I came in to see him. We went for lunch and it became clear that I would need to join Octopus Energy; Greg persuaded me to join Octopus to head up the business division, and to grow it, and I started in January 2018.”

Part of the appeal, Zoisa tells me, was that her previous client portfolio type meant that there are only 200,000 companies she could approach, while focusing on smaller business for Octopus brought potentially 4-5 million into the mix.

by working with these smaller companies, and partnering with the right ones, we knew that they would get our message out and, in so doing, reinforce our values and our mission to convert the country to 100% green power

“I didn’t believe we could simply buy the business through big ad spend,” Zoisa tells me, “so by working with these smaller companies, and partnering with the right ones, we knew that they would get our message out and, in so doing, reinforce our values and our mission to convert the country to 100% green power.”

So what types of businesses are we talking about? Zoisa explains that it can be anything from a micro-business or start-up all the way up to a company with 250 employees or so, using enough gigawatt hours (gWh) to power Arsenal’s Emirates stadium twice over.

With evident enthusiasm, she tells me that she inherited about 300 business accounts; “in the first year we grew that to 3,000.” Zoisa was also exceptionally lucky to have inherited a small but extremely agile team when arriving at Octopus.

One account she is delighted to have secured is that of Yeo Valley in Somerset, the family-owned dairy and farming megastars, and whose insistence upon organic farming methods chimes well with Octopus Energy’s relentless pursuit of all things sustainable. It’s a model that works; these methods have seen Yeo Valley grow to be the UK’s largest dairy provider.

after hitting on targeting the right kinds of small businesses, we decided ‘local’ should be the thrust of our efforts

Explains Zoisa: “With a small team and a limited marketing budget, after hitting on targeting the right kinds of small businesses, we decided ‘local’ should be the thrust of our efforts.”

To that end, she spoke to Octopus’s asset division and put together a groundbreaking deal that shows what Octopus can deliver for clients. This deal meant that Octopus could supply electricity* from a solar farm a few miles down the road to Leicester, where Octopus Energy has a dynamic and engaged city-centre office with 200 employees.

“We decided to call it Leicester Business Power, and believed that this new tariff would support the local economy as well as helping these businesses minimise their environmental impact. And we set up a scheme whereby companies would forgo their referral fee and choose instead to put it into charities that fight fuel poverty and homelessness. It’s good for the companies’ CSR strategy, and good for society, so that went really well, with great take-up.*”

Zoisa and her team decided to stage a presentation at local Spinney Hill Primary School to teach the next generation about the importance for the planet of weaning ourselves off fossil fuels and on to sustainable and renewable sources of energy.

But no one could have predicted what happened next.

“One of the things in Leicester that attracts huge buzz and coverage is the Richard III Centre,” says Zoisa. “On a whim, we got in touch with the CEO and went to meet him. We said, ‘One of the cultural icons of which the city of Leicester is so rightly proud is this and we would love to work with you’. He couldn’t have been more open to us, and the Centre partnered with us. So the launch became a joint launch in July 2018.” 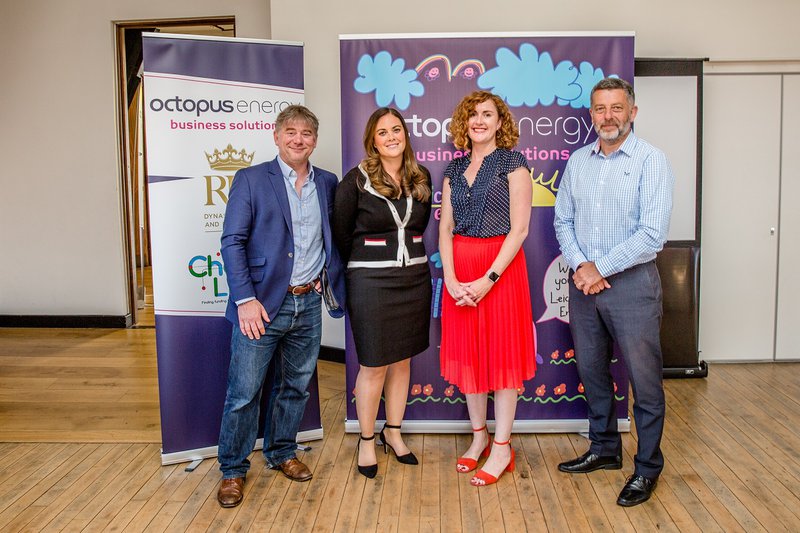 Expecting a bunch of school kids and perhaps a reporter from the local paper, Zoisa asked Octopus Energy CEO Greg to come along to say a few words. When they arrived they couldn’t believe their eyes. There were film crews, cameramen and women, journalists – the tie-in with the Richard III Centre proved to be magical!

We were proactively approached by some of Leicester’s most famous businesses about possibly ‘greenifying’ their energy provision, so our unwavering message that green is the way forward was chiming with businesses

“We signed up hundreds of businesses over the next few weeks, and were even proactively approached by some of Leicester’s most famous businesses about possibly ‘greenifying’ their energy provision, so our unwavering message that green is the way forward was chiming with businesses – and we hadn’t expected that,” says Zoisa.

The target in the next few months is to sign up a more modest 500 businesses, though as Zoisa says with a laugh, “It has been enormously rewarding to discuss Greg’s vision over lunch and then 18 months later to have hugely exceeded expectations and identified clear areas for growing Octopus Energy for Business.”

Back to Blog More on Business energy