Looking to a future where wind & solar farms are buzzing with biodiversity...

This summer Octopus Energy were excited to announce the acquisition of our sister company, Octopus Renewables, who manage over 300 renewable energy projects across Europe, generating enough energy each year to power around 1.5 million homes. Their massive £3.4 billion renewables portfolio is now operated by Octopus Energy Generation (of which now Octopus Renewables is a part) – making Octopus Energy Europe’s largest investors in solar energy, with the potential to keep nearly 1 million tonnes of CO2 from entering the atmosphere annually, and bringing green supply, energy tech and renewable generation all under one roof.

As the number of wind & solar farms in our portfolio increases, we’ve been thinking about all the other ways we can use our renewable sites to help the planet. After all, solar plants and wind farms aren’t just good for the clean, green electrons they generate – they’re also harbour valuable green spaces, with the potential to harbour an abundance of amazing wildlife.

To ensure that our spaces are put to good use there are best practices in place. People often don’t consider the grassy areas that so often surround soaring wind turbines or glistening solar panel seas, but each site is managed with the goal of promoting biodiversity and reducing environmental damage (sites have to draw up specific ‘habitat management strategies as part of their planning permission). There are loads of strategies, from planting wildflowers in field margins and managing land with grazing animals to bird boxes and bug hotels. With that in mind, many renewable operators have been going the extra mile to create habitat for UK wildlife and Octopus Energy Generation are actively looking for ways to promote biodiversity on the sites they manage. 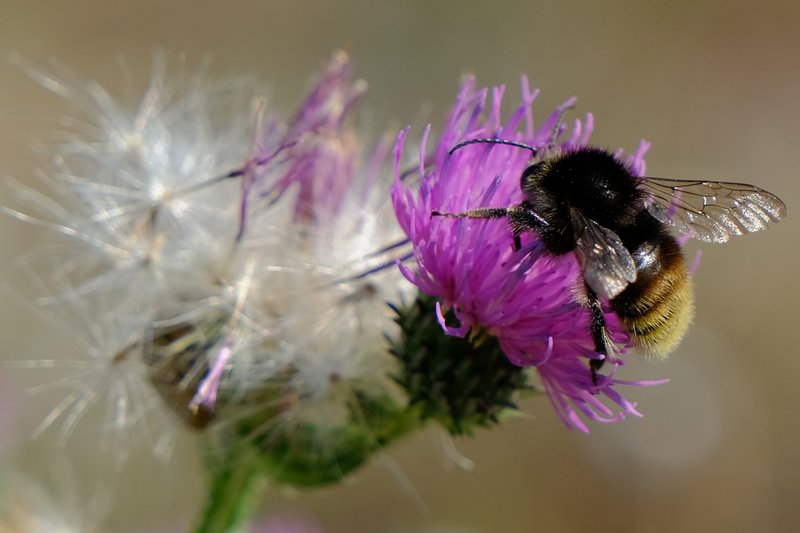 It couldn’t be a more important time to stand up for biodiversity. In 2016, out of 218 countries, the UK ranked 189th according to the ‘biodiversity intactness index’. Over the last 100 years, the UK has lost 97% of its meadows and other species-rich grasslands, with plants such as the Lamb Succory and the Downy Hemp-nettle having gone extinct, and the Ghost Orchid and Wood Calamint becoming critically endangered.

With that, populations of the UK’s most important wildlife have fallen by 60% since 1970, with numbers of farmland birds declining by over 55%, and a quarter of native mammals now threatened by extinction.

Pollinators such as bees and butterflies are of particular concern – a third of British bumblebee species are now on the brink of extinction. As an integral part of ecosystems everywhere, a decline in the number of pollinators is having a massive knock on effect, impacting organisms the world over. This includes us. According to the UN, as much as $577 billion of our annual food production relies on pollination.

Managing land when sustainability is key 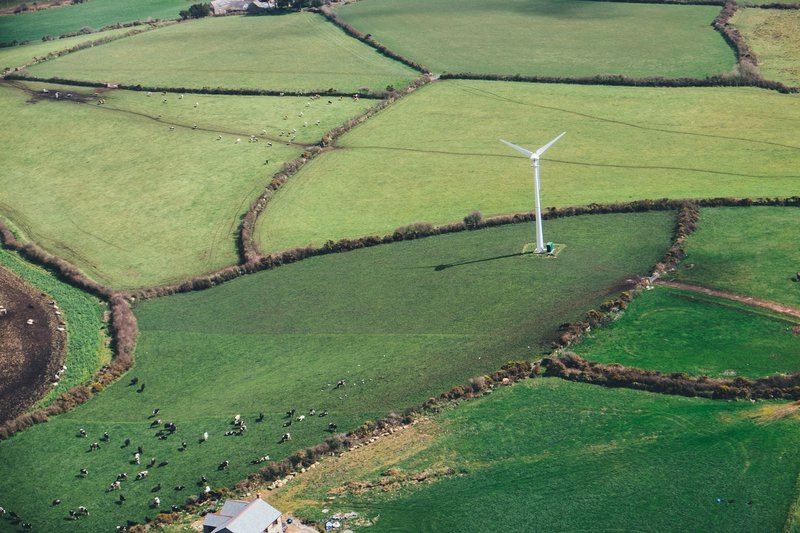 The more biodiverse an area is, the more living things it can sustain. Grazing benefits biodiversity in a whole host of ways. Unlike the neat finish you expect from a lawn mower, sheep disturb the earth as they munch away, leaving a mishmash mosaic of bare ground and grassy tufts that vary in height. This topological diversity is critical for biodiversity, allowing micro-habitats that provide food and shelter for a wide variety of species to flourish.

Studies have also shown that managing land with grazing can actually increase carbon sequestration. In other words, more carbon is captured and stored in the soil, preventing it from entering the atmosphere. This might seem trivial, but soil is the world’s largest land-based carbon storage system. With grasslands making up approximately 40% of the Earth’s surface, soil scientists estimate that if everybody adopted appropriate land management practices we’d be able to offset about a third of annual greenhouse-gas emissions.

Today one third (and counting) of Octopus Energy Generation’s sites are grazed by sheep, who have been introduced to keep the long grass in check throughout the year. This arrangement pleases herders and engineers alike – the sheep get a free meal and operators don’t have to worry about grass shading their solar panels. 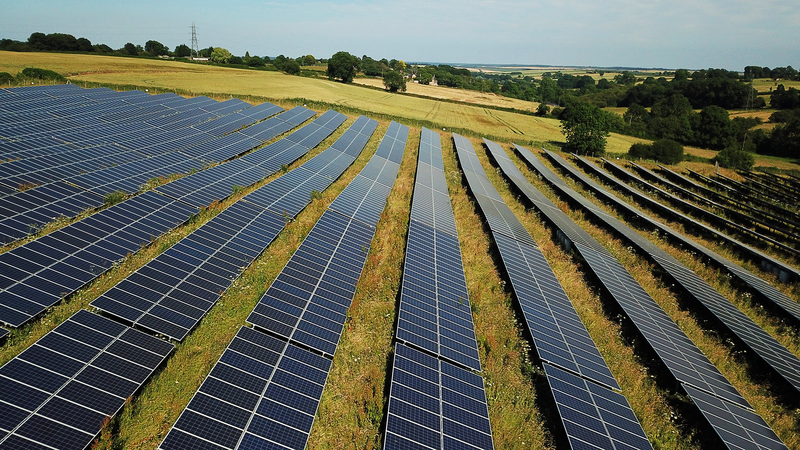 Whilst the sheep help to keep things under control, grassy areas spring to life when they are left alone completely. Some of Octopus Energy Generaton’s sites opt for a more natural approach, setting patches of land aside for ‘rewilding’. The diverse wildflower meadows support pollinators at every stage of their life cycle, providing pollen and nectar resources throughout the Spring and Summer months.

For some sites, like large wind farms, this can be a fantastic way to encourage native pollinators and other critters back to places where they haven’t been seen in years.

In other cases, especially where long grasses and tall flowers can be a fire hazard or block solar panels, this sort of large-scale rewilding is not suitable. Octopus Energy Generation, however, are exploring new ways to do this both on and off site in the future. Operators can choose to plant carefully selected wildflower meadows, or to rewild hedge rows and field boundaries. In this way, sowing native plants such as yellow rattle, bird’s-foot trefoil and red clover can help provide habitat for a larger variety of insects and organisms, including several endangered species of bumblebee.

There are a range of other options too. Beehives, like the ones Octopus Energy Generation installed near one solar site it manages in Lincolnshire, are another good way to support pollinators. With 70% of ponds having vanished from the British Countryside, creating or revitalising water features can play a vital role in improving the wealth of species, from toads and newts to herons and grass snakes. And then there’s also the opportunity to install a wide range of natural real estate, be that bird and bat boxes, hedgehog homes, or bug hotels.

Ways to support your local wildlife this winter 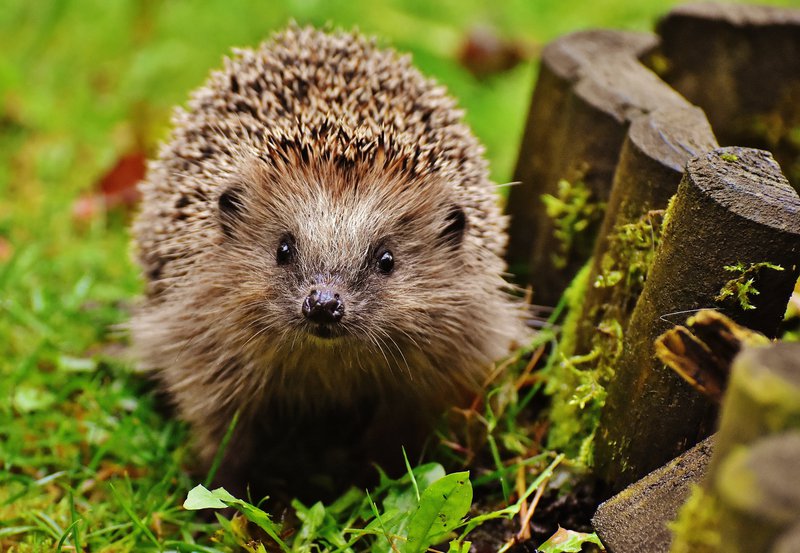 It’s important to remember that each renewable site is unique, and there’s no ‘one size fits all’ approach to supporting biodiversity. As in your local area or garden, whether you’re surrounded by rolling hills, live close to a river or in a bustling city, the types of wildlife and their needs differ; and of course the amount of space available can be a restriction too.

There are a multitude of ways to help support local biodiversity throughout the seasons, so we mustn't forget that as everyone cosies up for winter, the animals are too. Leaving sheltered areas or purpose built boxes give critters a safe space to hide from the elements and in some cases rear their young. Even gathering a pile of leaves or a bundle of trimmed stems can create a safe home for insects and hedgehogs. Fresh water and small amounts of seeds, mealworms and berries can see birds and through wintery weather, ready for the spring when no frost makes for the perfect time to plant nectar rich flowers, sew a small wildflower meadow or grow a hedgerow for food & shelter going forward.

What’s next for green generation?

As more and more of the UK's power comes from renewables, ecologically-minded green generators are going to become more and more important. Given declining biodiversity in the UK, it’s vital that we all go above and beyond to support our declining wildlife populations. One of Octopus Energy Generation’s core missions is to protect and enhance environmental potential. With that in mind, they’re keen to explore new, creative ways that they can lend nature a hand across the renewable sites they manage – and beyond – working with local communities and landowners to develop new strategies that benefit wildlife everywhere. Together with Octopus Energy Generation, we’re excited to see what the future holds.

By Becky Boulton and Jackson Howarth 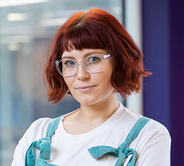