Our smart tariff customers know that if you want to make the most of Octopus Agile or Octopus Go, you should really be taking advantage of our Agile API. This is the same API that lets you access Octopus IFTTT and Alexa services, but it also allows you to receive personalised half-hourly consumption data, create your own apps, and run your own smart appliances. We’re big fans of anyone that does something ‘smart’ with our API because so often, they end up pushing the boundaries for everybody else. Here's the story of one such pioneer.

On the 6th November 2019 a new Twitter account called ‘EnergyStatsUK’ posted for the first time. Its message was simple: “Hello World!”. The next day, however, it posted again, and its second message was more substantial - it contained a graph. That graph happened to show the average Octopus Agile prices over the course of that particular day, as well a comparison to our Octopus Go tariff.

No one noticed - there was not a single ‘Like’ or ‘Share’, but the same thing happened the next day, and the day after that. After a while, several eagle eyed Octopus Agile customers spotted the graphs and started sharing the posts; 5 days later EnergyStatsUK hit 100 followers. The account has posted every day since. 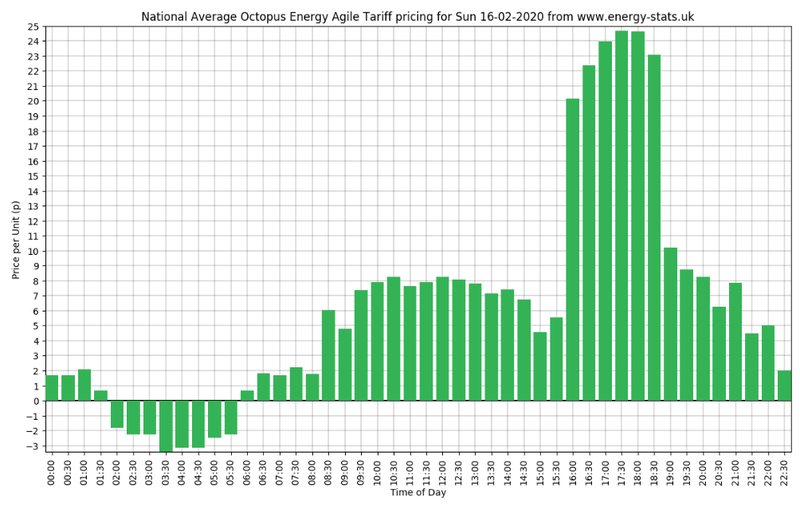 I first found out about EnergyStatsUK through the Octopus Agile Forum (an online forum I run for Agile enthusiasts). Not long after that, one of our regulars - Agile enthusiast Mick Wall - revealed that he was the brains behind EnergyStatsUK. When I, intrigued, asked about the page, he told me exactly what he was up to.

Mick has worked in IT infrastructure for almost 30 years. Having discovered the API for the Agile tariff, he started experimenting with it in his spare time. In the process, he taught himself how to use Ubuntu, Wordpress, InfluxDB, Python, JSON, Nginix, Couldflare, SSL and Grafana, and in the end he finally created https://www.energy-stats.uk/ and https://twitter.com/energystatsuk.

What started as an experiment quickly began to get a lot of attention. It soon became clear that Agile customers (and even some non-Agile customers) were finding the daily Twitter updates really handy. As of February 2020, his website was getting around 500 hits (around 300 visitors) a day, and this number continues to grow rapidly. Traffic comes from a wide variety of sources; Twitter, Facebook groups, YouTube, our Octopus forum, a Tesla owners’ club, a Money Saving Expert forum, a Speak EV forum, a Piston Head forum, and even the Bulb customers forum. The interest and enthusiasm for our Agile and Go tariffs is clearly reaching far and wide.

When I asked about where the idea came from, Mick told me that it all started when he installed solar panels on his roof.

“We live in a 1930's 3 bedroom semi, and had 5.1kWh of solar panels across different roofs. Our 3.68kWh inverter was installed in September 2018, so we just squeezed in for the final throes of the Feed in Tariff.”

After generating his own solar energy, Mick found the transition to an Agile Tariff quite an obvious next step. The path from solar generation to Agile is a actually quite a well trodden one, taken by many of our new Agile customers. This is largely because customers who generate their own solar power are already well versed at looking at daily breakdowns of their solar generation and home consumption, and balancing their energy usage to match.

Agile pricing is published on the Octopus account dashboard which works for most, but people like Mick have developed ways to view their daily prices that better suit their preferences. Having initially built EnergyStatsUK for his own benefit, he decided to make Agile pricing publically available for everyone to see (via Twitter and a website). Here, Mick exhibited a classic entrepreneurial trope - solve a problem for yourself and there’s bound to be a group of people just like you who’ll love your solution.

Mick also included his own Octopus referral code, hoping to just cover some of the web-hosting costs, and quickly started gaining a fair bit of account credit. Upon realising this, Mick sent an apologetic email to our CEO, Greg:

“I get the guilty feeling that this isn't what the referral system was intended to be used for?”

Upon seeing this email, Greg got in touch with Rebecca, our Product and Marketing Director and said: “I’m delighted that he’s doing well and think that we should reward him massively! [This] is everything we’d like to encourage.”

“Firstly, we have never received an email like this before. Whilst we do have some protections in our T&Cs around referral misuse - I LOVE your site, we're really proud of our innovative tariffs, and this is a great way of showcasing them. Please crack on as you are with no restrictions from us. No-one has ever contacted us to say 'er, bit awkward, feels like I'm earning a bit much' yet!”

Mick was delighted. Once we’d credited him with his well-earned credit, he started looking at tech he might invest in.

He started with the heating - usually the largest consumer of energy in the home.

“To try and help, I bought and set up small Xiaomi temperature sensors in each room of the house (about £10 each) that report back to Home Assistant (that I have running as a Virtual Machine on my little Intel NUC home server). These sensors have allowed me to balance the temperature of the rooms a little using the TRVs (Thermostatic Radiator Valves), but it’s still not the best solution. No matter how much you tweak manual radiator TRVs it never seems to properly balance.”

This is the first time I’ve heard someone try to balance heating per room using manual TRVs and room temperature sensors, and I recommended using independent smart TRVs instead. If you want to try this at home, it’s also worth noting that you don’t need a complicated virtual machine set-up to run Home Assistant - a Raspberry Pi can be more than adequate in most cases.

Next, Mick turned his attention to transport. Electric vehicles sales are growing quickly, particularly thanks to the new Benefit In Kind tax relief scheme. In Mick’s words:

“My wife is a community nurse, and with this April’s changes to the company car ‘Benefit In Kind’, it looks like we can get an EV at a very favourable price.”

Mick’s shopping list includes an Electric Vehicle and an EV charger - ideally one that can sync itself to the solar generation from the roof, meaning the car charges from any excess solar during the sunniest times of the day without having to draw on the grid for energy. I’ve recommended Octopus Electric Vehicles, who can help you get great deals, and make the most of all the existing government incentives.

Mick also began to think about installing a home battery to store the remaining solar energy that wasn’t being used up. This could then be used to run the house during the 4.00- 7.00pm daily peak in grid demand, when Agile prices are generally highest. It could also charge up on cheap grid energy when the Agile price is particularly low overnight or when we have our famous Plunge Price events (where we pay our agile customers to use energy!).

Mick’s also done some interesting technical work in order to monitor his electricity usage, and work out where specifically he can make savings. Warning - tech level: 🌶️ 🌶️ 🌶️

emonPi uses CT clamps to monitor the flow of energy which Mick then forwards to PVOutput every 30 mins (because they have a great charting feature). This can be extended for EV charger monitoring and battery monitoring (etc.), if more CT clamps are used. Whilst each device/system has its own built-in chart, using Open Energy and CT clamps is a neat way to see everything in one place. 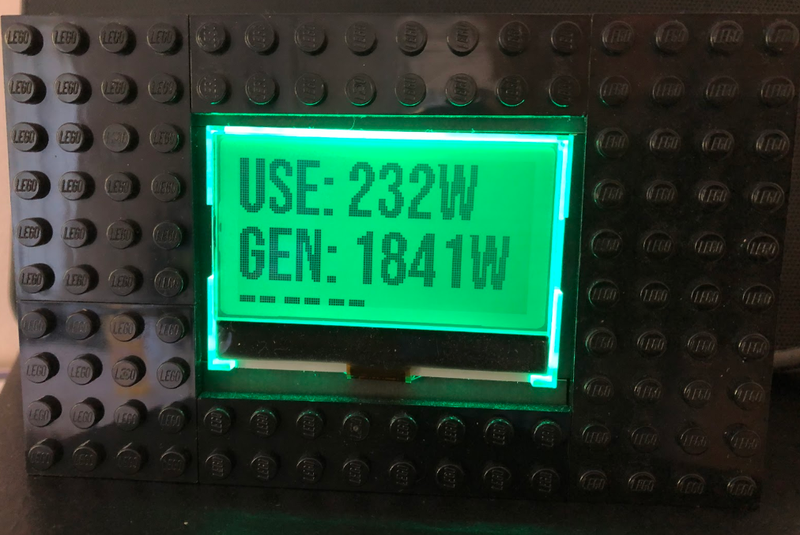 Mick has used a Raspberry Pi Zero W with a Pimoroni GFX hat screen (in a hand built Lego box!). Using a python script, Mick pulls the usage/solar data from the emonPi every 10 seconds and the screen changes between green/red depending if the house is exporting or importing. This simple red/green - not generating enough/generating enough display is incredibly easy to understand. In the future he intends to replace this with an Android tablet running Home Assistant Dashboard.

2 weeks later, Mick had been on a shopping spree and picked up:

All of these products (and there are many more out there!) can drastically reduce energy consumption, helping you to make the most of self-generated solar energy, and grid-energy when it is greenest and cheapest (through price-signals). In both his original EnergyStatsUK project, and his subsequent venture into the smart home world, Mick has shone a spotlight on a whole host of wonderful tech, showing just how much you can achieve with it.

It’s worth emphasising that Mick’s story isn’t a one-off. I regularly talk with customers who are using our agile API with their smart tech to save tonnes on their energy and reduce their carbon footprint in the process. It’s always great to hear about their inventions and innovations, and we’re able to share all sorts of ideas (If you’re reading this and would like to discuss any of this any further please don’t hesitate to get in touch).

To get involved, we don’t all need to be like Mick - but what he (and our other wonderful pioneers) are doing helps us visualise what home and home energy management will soon look like. Thanks to their work, the rest of us don’t need to learn how to code to build a smart home, and it’s become so much easier to integrate different pieces of smart tech. These days, your smart tech is compatible with our Agile tariff from the get go - meaning super green energy is now super easy.