The week commencing 16th March saw a rapid escalation in measures designed to curb the spread of Covid 19. On Monday 16th, the government issued advice for everyone to avoid social contact as far as possible, to work from home and to not go to pubs, clubs, restaurants and theatres. By comparing anonymised smart meter usage data from 115,000 customers from this week and last week, we’ve identified an increase in daytime energy usage which we attribute to more customers being home during the day. This effect appears to start on Tuesday after the announcement on Monday 16th and becomes more pronounced through to Thursday.

Energy usage on weekdays increased by between 2-4% across the whole group of customers as a result of the measures. We’ve used two approaches to try and isolate the impact on those customers who have stayed at home with the below results.

To ensure the 115,000 customers were representative of UK domestic users, we compared them to Elexon’s standard load profiles which are used to estimate usage for customers without smart meters. The Octopus Smart meter customers are noted to have slightly higher than average consumption but follow a very similar shape throughout the day to Elexon’s deemed profiles. The higher nighttime usage is accounted for by the presence of economy 7 customers in the Octopus Smart Meter group.

Average effect across all customers 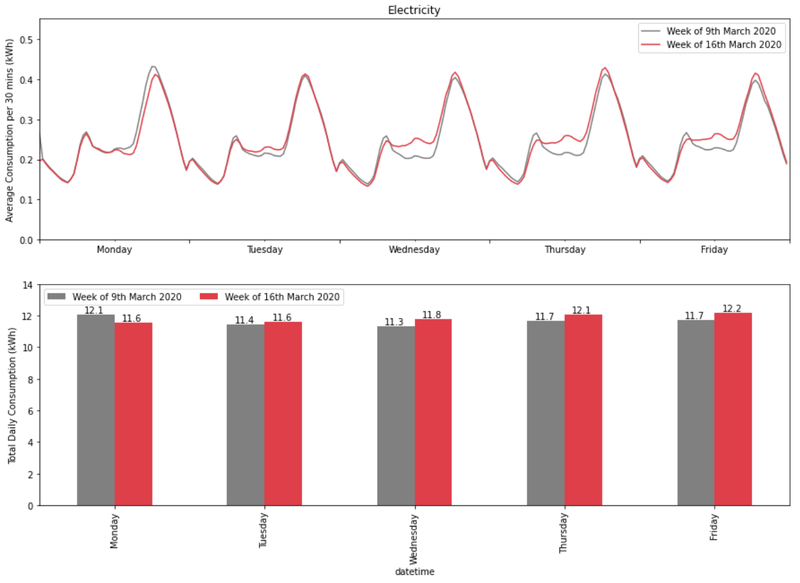 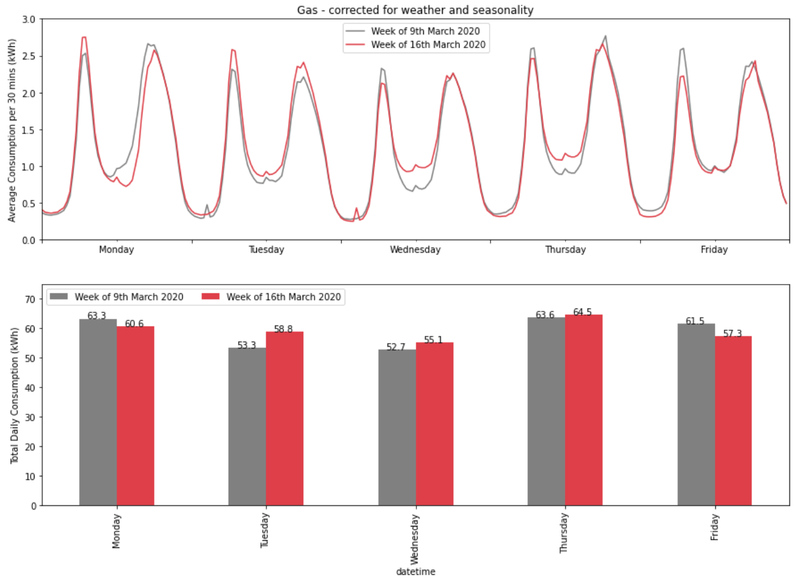 Gas consumption was corrected for weather and seasonality by multiplying the consumption on week 16th by the ratio of Xoserve’s LPA coefficients for each weekday.

Identifying the effect of those who did work from home

The ~4% increases reported above are for the whole group of smart meter customers, many of whom may not yet have changed their consumption behaviour. The signal we see above is therefore a diluted effect of those customers who are spending more time in their homes and those who haven’t changed behaviour. To be able to effectively plan for any increased usage and spending on domestic energy, we need to disaggregate the two groups so we can estimate the increased consumption of those customers who are now working from home.

In the absence of any labelled data, this poses a challenge. The issue being that a single customer’s consumption profile is stochastic. There is a natural variation in a customer’s usage profile week on week regardless of any underlying behavioural change. This is illustrated by the plot of 10 randomly selected customers below. Without labelled data, selecting who of these we think has changed behaviour and started working from home is highly subjective. Below we take two approaches to try and isolate the working from home cohort and estimate their increased energy consumption. 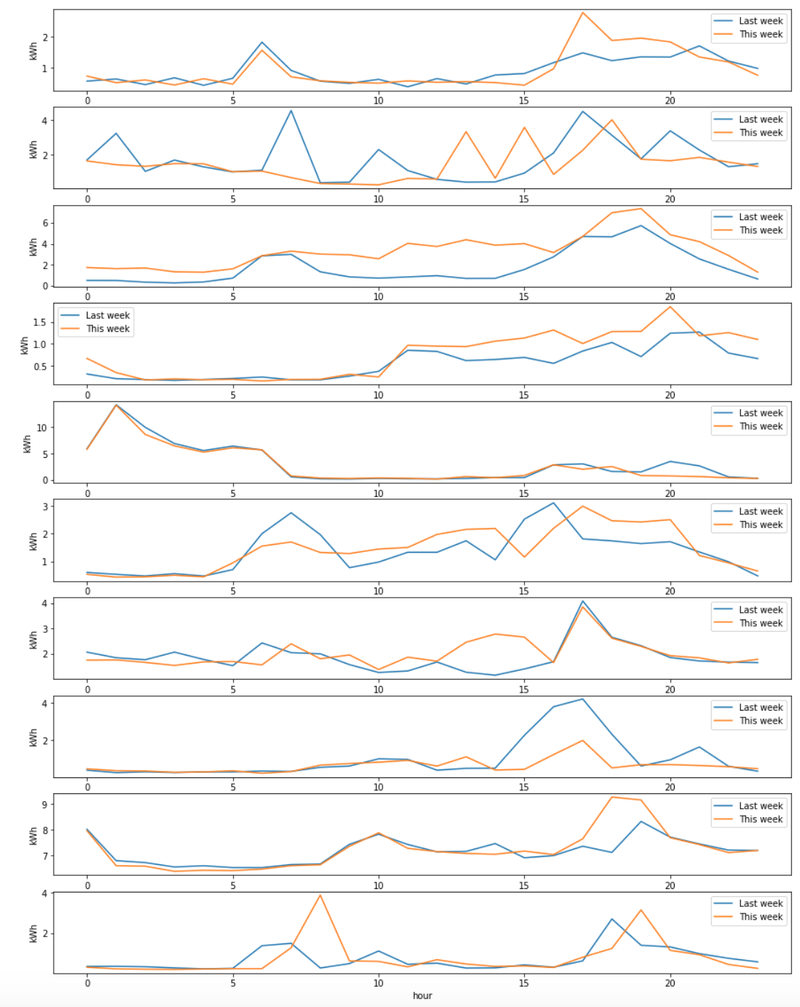 For each customer we define two variables:

The plot below shows the distributions of X and Y for all customers:

To estimate the percentage of customers staying at home and how much extra they used, we simulated a proportion of customers p staying at home with an increased consumption ΔQ. We chose the combination of p and ΔQ that minimised the Kullback-Leibler divergence between our actual distribution and our simulated distribution. The below plot shows the KL divergence plotted against p and ΔQ for electricity. From this we infer a best estimate of 30% of customers staying home using an average of 1.5 kWh extra during 9am - 5pm. 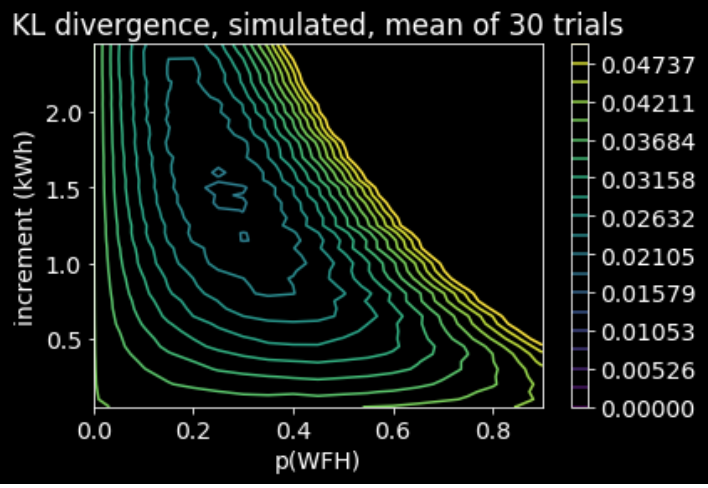 The best fit simulation is plotted below:

The same approach was taken for seasonally corrected gas consumption. A summary of results is shown below:

To attempt to isolate those customers who stayed at home we used a crude rule of selecting customers who showed increased 9am-5pm consumption for all four days Tuesday to Friday. 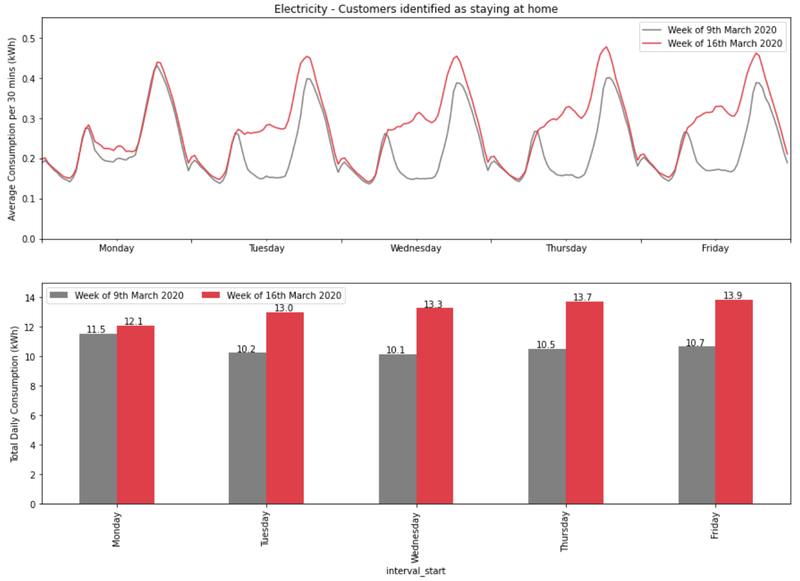 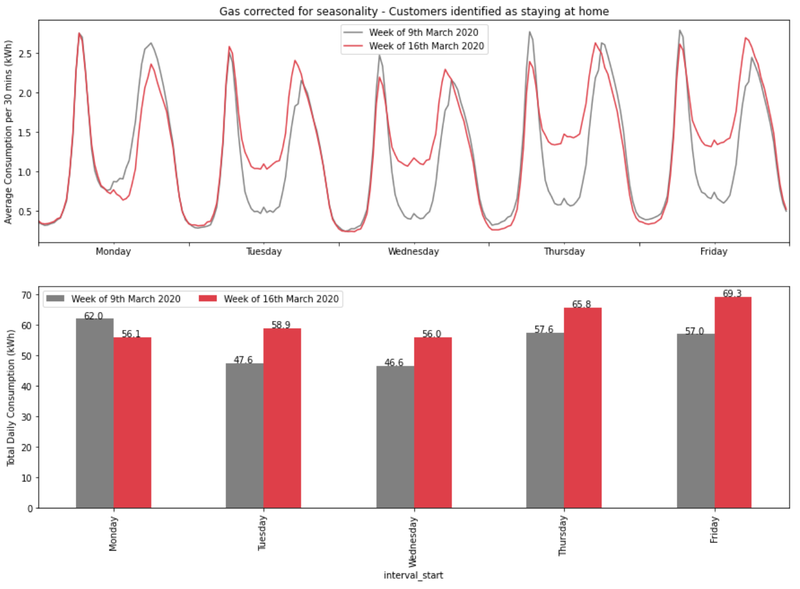 From the whole group average, we see a noticeable trend in higher domestic energy usage in the middle of the day. There is no perfect method to identify which customers are staying at home and how much extra energy they are using. We’ve applied two methods to try and isolate the signal from those customers staying home and get the below findings.

If you are applying these results to forward projections of energy consumption or to customer segmentation for bill relief it is important to be cognisant that: 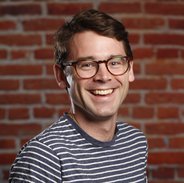