*This is a guest blog from Charlotte Johnson at Upside Energy. We're over the Moon to welcome Upside Energy as new members of the Octopus Energy family!

By many accounts, 2020 has been full of ups and downs, but no-one could have predicted the impact of the Coronavirus on the energy system. Although reaching net-zero by 2050 is still a great challenge that will require all of us to come together to achieve, 2020 gave us a glimmer of hope by demonstrating that a system with high levels of renewable generation can be a reality. As 2020 draws to a close, we share our thoughts about it and what to look forward to in 2021.

Since 2010, the proportion of generation from coal and oil has declined dramatically, being replaced by generation from wind and solar (Fig. 1). In April, solar generation peaked at 9.68GW meeting almost 30% of UK demand and surpassing the previous record of 9.55GW set back in May 2019. Likewise, this year, the system ran without coal for 67 days straight, the longest hiatus since 1970. In 2019, it only achieved 18 days (Fig. 2). With the Government targeting 40GW from offshore wind by 2030 and the Energy White Paper bringing forward the phase out of coal from 2025 to 2024 this trend is expected to continue.

The rise in renewable generation reduced the carbon intensity of the grid. As a result, August 17th, GB electricity was at its ‘greenest’ ever with only 57 gCO2 / kWh. However, our annual average is still high at 222 gCO2 / kWh in comparison to our 2030 target of 100 gCO2 / kWh (Fig. 3). At first glance, this may seem like a big challenge, although we take encouragement from how far we have come in comparison to 336 gCO2 / kWh back in 2015.

Low marginal cost sources of generation depress wholesale prices through price cannibalisation. Last December, for the first time ever, overnight day-ahead auction recorded negative prices due to low demand and high wind output. We expect this to become a regular occurrence, as seen throughout 2020 (Fig. 4). In three instances during May, the UK’s half-hourly prices for day-ahead supply went negative for over 12 hours. While negative pricing is a significant risk for renewable generators with investments supported under CfDs, it is an opportunity for storage and all other dispatchable asset owners; especially those with agile tariffs. The system price is also more frequently negative overnight and during the day in summer in comparison to previous years (Fig. 5).

In addition to the increased periods of negative pricing, a forecasted rise in commodity costs[1] (not withstanding immediate impact of COVID-19) will result in higher wholesale prices. This is driven by the fact that the marginal source of generation is gas. We have already experienced these higher prices when the margins have been tight during peak times.

System tightness will lead to exceptionally high prices. This past winter National Grid ESO (NGESO) issued two Electricity Margin Notices (EMN) on November 4th and 5th between 16:30 -18:30. These were the first EMNs since 2016. The low margin was likely caused by falling wind output (just over 3GW) and planned and unplanned outages at major thermal power stations. CCGTs and coal compensated for the shortfall which led to exceptionally high day-ahead and system prices — highlighting the need for cheaper sources of flexibility at scale, such as storage, and demand side response.

Earlier this year, on March 4th, the system price jumped to £2,242 / MWh during Settlement Period (SP) 37, between 18:00 and 18:30. This occurred because wind was generating approximately 2GW less than NGESO’s forecast and 4.4GW less than it had been generating the previous day. For context, the average system price during SP37 and SP38 in 2019 was £54.50 / MWh and £53.00 / MWh, respectively, and £28.20 / MWh and £29.20 / MWh in 2020. In this instance, NGESO called upon its short-term operating reserve (STOR) meaning that the system price was calculated using the Loss of Load Probability, and the Reserve Scarcity Price, currently set at £6,000 / MWh. Since 2002, the 10 highest system prices happened over 4 days and all within the last 4 years (Table 1). A new trial launched by NGESO designed to use batteries in the Balancing Mechanism to meet the need for reserve will hopefully provide an economical alternative to using CCGTs for flexibility.

Additionally, NGESO published two capacity market (CM) notices due to the margin dropping below the threshold set out in the CM rules. The notice in September was the first warning in two years. Whilst this may seem unusual for a warm day in September, it does highlight the challenge of balancing the grid when you have increasing levels of renewable generation and very low transmission demand (Table 2).

This month, a capacity market notice was issued as wind generation forecast was well below normal, there was low availability of coal generation and CCGTs to compensate, and all coinciding with the forecasted low temperatures leading to the highest peak demand forecast of the winter so far, 46GW.

In recent years, increasing levels of embedded generation has posed balancing challenges. This year the exceptionally low demand (Fig. 6) on the Transmission System, due to the lockdown accentuated this balancing challenge. In quick response, NGESO developed the Optional Downward Flexibility Management (ODFM) scheme for distributed generators who do not participate in the balancing market, to receive payments for either turning down generation or turning up consumption. This service was called upon five times, costing NGESO (and indirectly consumers) £12.3 million. The average accepted price for asset owners was around £120 / MW / h mostly from wind assets in Scotland and solar in the south of England (Fig. 7). 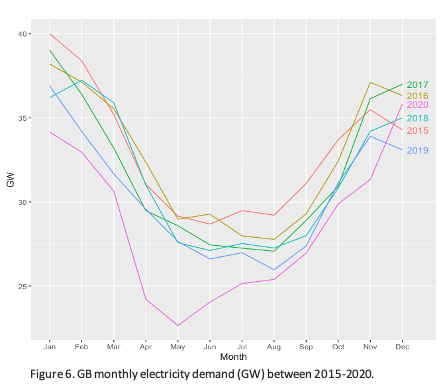 An effect of higher renewable penetration is declining levels of inertia which the NGESO has had to manage. As a result of declining system inertia balancing the system has been costly (Fig. 8). 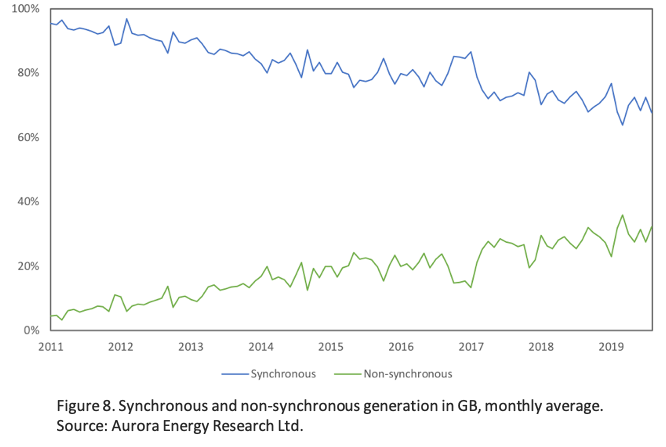 In response to this, NGESO launched Dynamic Containment (DC), the first of three new and faster acting frequency response products. DC is designed to operate post-fault, i.e. for deployment after a significant frequency deviation. These faster acting frequency response products are needed because system frequency is moving away from 50Hz more rapidly as a consequence of imbalances ( see previous blog on frequency). With clearing prices just under £17 / MW / hour, the value in DC contracts is approximately double the volume weighted average price of the products it is set to replace. but NGESO is aiming to buy 1GW of the service next year. The next two products will be dynamic regulation and dynamic moderation.

The introduction of dynamic containment in October has left a shortfall (Fig. 9) in the Grids demand for FFR versus the supply in the market and therefore, prices have rebounded slightly in the monthly auction (Fig. 10). 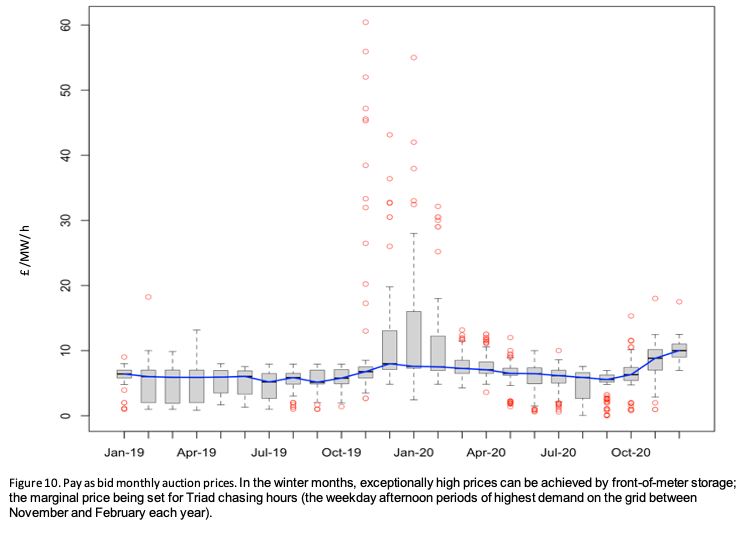 These new services are leading to increasing Balancing Services Use of System Charges (BSUoS — Fig. 11). This year alone, NGESO spent over £700 million balancing the system during the lockdown period. This is still subject to an Ofgem[2] investigation.

Covid-19 gave a view into how the Grid could be managed in a system with high levels of embedded renewable generation. Moving forward, as renewable generation continues to increase, and heat and transport are electrified, there will be an even greater need for flexibility on the grid — both to balance the system in real-time and to keep the system safe when there is limited inertia. This will play an integral role in the UK reaching its net zero goal by 2050.