Our commitment to 100% green electricity

We've written extensively about this in a more recent blog - a deep dive into what makes us so very green!

We take the sun, the wind and a bit of organic decomposition, and we turn it into power.

The generation of solar and wind power don’t release any CO2 (the greenhouse gas to blame for global warming), and the amount of CO2 released by burning biogas is the same as that released during naturally occurring organic decomposition.

The alternative to renewable energy is getting power from burning fossil fuels, which is how the world has been powered since the days of the Industrial Revolution. Both coal and oil are just that: fossils - the ancient remains of plants, algae and animals, which have been put under immense heat and pressure. These fossil fuels hold a huge amount of trapped carbon, which is released when they’re burned – and that increase in CO2 means a warmer planet and rising sea levels.

How does the renewable energy supply chain work?

Renewable energy is generated, added to the national grid, mixed with energy from other sources, and finally piped out to houses and businesses in the UK. 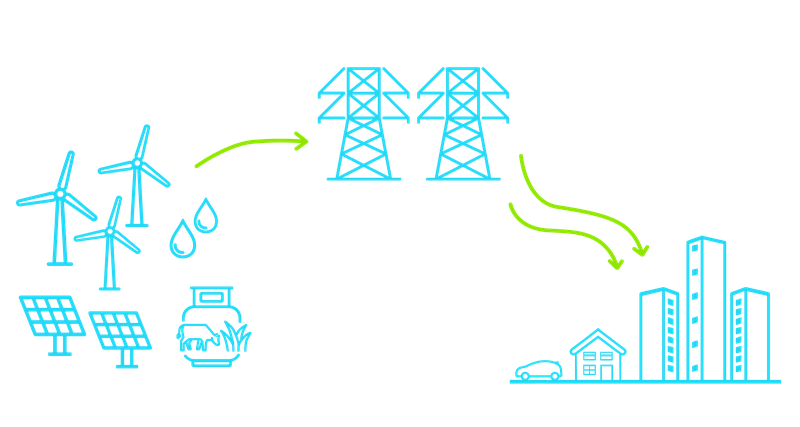 At Octopus Energy, all of our tariffs are 100% renewable electricity – which means we will match every unit of electricity you use with a renewable certificate for the same amount.

This matching is done through Ofgem’s REGO (Renewable Energy Guarantee of Origin) scheme – the system used by suppliers across the U.K. to verify their claims of the amount of renewable energy supplied.

Alongside our REGO certificates, we contract directly with renewable producers, such as solar farms or anaerobic digestion plants, on Power Purchase Agreements, or PPAs.

Finally, we're a part of the Octopus Group – the UK’s largest investor in solar generation, with over £2 billion invested so far. That investment alone generates enough power to supply a city the size of Manchester.

As well as wind and organic waste generation, Octopus Group invests in ‘smart technology’ to help build a new way of supplying and generating energy around the UK. One that will be based on a more transparent, push-and-pull network of tomorrow, helping to provide some much needed flexibility in the energy industry.