London, 18th January 2021 - Octopus Energy, UK’s fastest growing energy supplier, moves up the energy supply chain with the acquisition of its first two own wind turbines which will bring cheaper greener power to local communities. The move is accompanied by the launch of the world’s first local time-of-use wind tariff.

The entech pioneer, which has 1.8 million UK customers, has bought the turbines in Caerphilly, South Wales, and Market Weighton, Yorkshire. Each turbine can generate up to 500 kilowatts (kW), enough to power up to 400 homes per year each.

From January 2021, local communities will benefit directly from their locally-sourced green power. The Octopus Energy ‘Fan Club’ tariff will offer households living near the turbines bespoke 100% green electricity tariffs. Octopus Energy customers who use electricity when the turbines are spinning, which is roughly 98% of the time, will profit from a 20% discount on the unit price. When the wind picks up and the turbines are producing even more green electricity, the unit price will see a price cut of 50%.

Compared to the price cap, currently set at £1,042 for a typical dual-fuel household, Octopus Energy ‘Fan Club’ customers can save up to £229 off their bills while using this revolutionary new tariff.

The two turbines, named ‘#1 Fan’ and ‘#2 Fan’, are the first of many members of Octopus Energy’s ‘Fan Club’, and signal the company’s first foray into the generation market. The local generation project will be led by Octopus Energy’s Director of Generation, Zoisa Walton.

“Octopus Energy’s first ever own brand turbines are now on the grid, and we’ve included the UK’s first windy tariff to boot - we halve the price of your electricity whenever your turbine is spinning fast. This is the first step in a huge plan for Octopus owning its very own generation and offering local wind tariffs across the country. It means we can begin producing the clean, green power we provide to customers ourselves and incentivise customers to use energy when it’s the absolute greenest.

“By matching this generation with our proprietary agile technology, we’re unlocking exciting opportunities for the cheapest electrons to be the greenest. Soon local customers will be able to join the ‘Fan Club’ and get discount prices for windy days, helping out their pockets and the planet.” 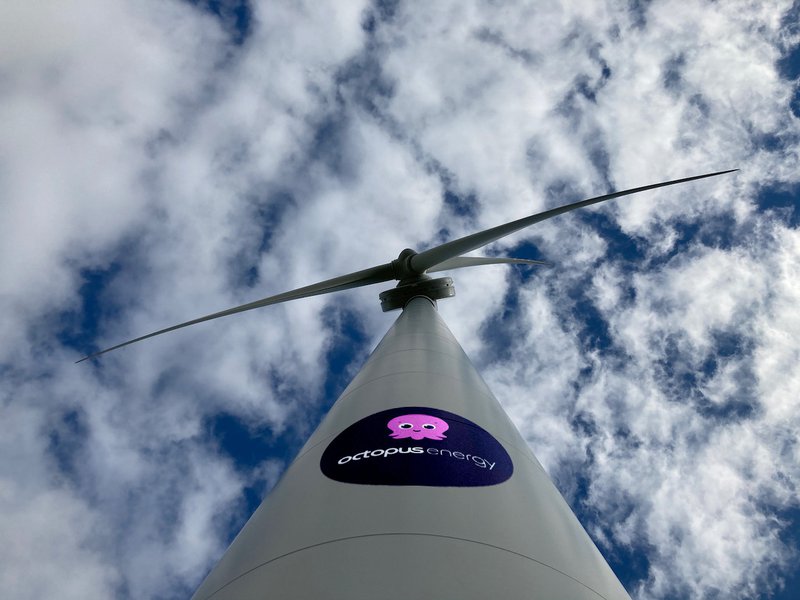 Video announcement and accompanying imagery can be downloaded here.

Octopus Energy launched to the public in April 2016. It supplies 100% renewable electricity and gas to over 1.8 million UK homes. Octopus Energy is the only Which? Recommended energy supplier for a third year in a row, topping the table in 2020. It also recently won Best Utility at the Utility Week Awards. Founded by e-commerce entrepreneurs, Octopus Energy has a different starting point to other suppliers, aiming to redefine what is possible for consumers and the system by using technology and data to deliver the best products and experiences.

Octopus Energy is backed by Octopus Group, a financial services and energy firm, which manages more than £8.9bn of funds. Octopus has invested more than £3bn in renewable assets across Europe, while its ventures arm has backed UK success stories like Zoopla, Depop, Secret Escapes and SwiftKey. In April 2020, Octopus Energy became a UK tech unicorn, valued at £1 billion following an investment from leading Australian energy company Origin Energy.