Electric Vehicles are an essential element in our transition to a clean, green future, and it’s not just because they’re ultra-low emissions. We’re right at the forefront of a pretty incredible alternative use for the car batteries. It would do massive good for the UK's fuel mix, save you money, and ensure our energy infrastructure can support an all-electric world. It’s called vehicle-to-grid (V2G) charging.

With vehicle-to-grid, your EV can be used as a battery pack, letting you sell stored excess battery back to the grid when demand for energy is peaking.

We’re trialling this tech now with our groundbreaking Powerloop bundle, one of the world’s first mass domestic V2G projects.

How does Powerloop work?

Customers with a Nissan LEAF have their homes kitted out with a special V2G compatible charger. The V2G charger can import energy to charge, but also export energy to feed it back to the grid. Like this: 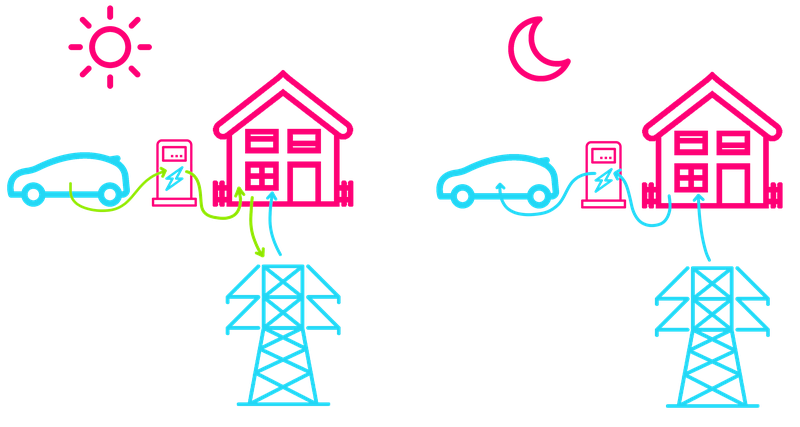 Drivers can fully recharge their car in off-peak hours when electricity is at its lowest price, and then sell the same energy back to the grid when prices are high. It’s a savvy investment that offers some of the cheapest charging rates possible.

With vehicle-to-grid, electric cars become a solution to the problem they create…

Vehicle-to-grid tech is getting a lot of attention at the moment for its potential to help balance the grid as we move towards a more electric world. Through vehicle-to-grid, much more electricity would be bought and stored when it’s not in demand (and therefore much cheaper), usually during the night. This means far less energy would be being consumed at peak times, when the grid often has to call on gas-powered stations, for example, to meet the high energy demand. All these drivers charging overnight are therefore helping to reduce the UK’s dependence on fossil fuels – and they’re making money, too, by selling the energy back to the grid at a higher price than they paid for it.

To help you to understand why this is important, let’s use the analogy of the Tube, London’s Underground system.

It’s notoriously rammed between 7am and 9am and again between 5pm and 7pm. But the rest of the day, Tube carriages are half-empty. So the system needs to be prepared for those times when it is under the most stress.

It’s the same thing with the grid. In the small hours of the morning, you’re most likely to see lovely renewable energy from wind farms being fed into the grid in large quantities. But, no one is using energy at this time.

That makes it the optimum time to charge your EV and also to store any surplus, generally renewable, electricity. (Lots of solar energy being produced during business hours, when no one is at home, has a similar impact.) Then at the time of most stress, the early evening, the grid is forced to call on fossil-fuel providers to cover the extra demand of the ‘rammed tube’ peak.

The benefit of V2G is two-fold.

One, you’re not adding to demand upon the grid at times of stress (at peak hours when the system is under most demand, meaning it’s all hands to the pump for the national grid and worrying about where the electricity comes from is a luxury that, up until now, the grid has been unable to afford).

In other words, at times of stress, the grid is forced to call upon “dirty” energy from fossil-fuel providers. It’s estimated that the spend that will be saved by enabling a smart energy system – that is, one that can identify exactly what mix is coming from renewable sources, at what time and how much of the energy that you consume comes from these sustainable sources – will be between £17bn and £40bn by 2050. This means that you can manage your consumption in a smart way and choose to use only renewables. The cost to the grid – and, of course, the planet – if we don’t achieve a 100% reduction in carbon emissions by then scarcely bears thinking about.

And second, selling your typically renewable surplus electricity, harnessed in the middle of the night, back to the grid means more of the energy being consumed at peak times comes from renewable energy, and we can rely less on fossil fuels.

With EVs, instead of driving around in a shell on top of a petrol container with fuel that just sits there being gradually depleted, you are instead driving around in a stylish new car that’s effectively a mobile battery pack that you can drive to the shops, pick up the kids AND use to store cheap energy that you can sell back to the grid when prices are far higher than you paid for it. Win-win-win – you can earn while you sleep.

The Octopus Powerloop bundle ensures that making the most of this cutting-edge technology doesn’t require you to pore over a bank of screens. It’s designed to let you drive without analysing every kWh you consume or export.

Using a simple app that we have developed, you control when you want to charge your EV and how much charge you need your EV to have by 8am (let’s say, 70%). We’re building in a baseline that will never allow the charge in your EV to drop below a certain amount so you’re always covered for emergencies. And the excess that you store to sell back to the grid will be interrupted if the charge falls outside of these parameters. It really couldn’t be simpler.

Thinking of replacing your car?

If you haven’t already done so, there’s never been a better time to switch to the car of the future. Discover the Octopus Powerloop bundle today:

The Octopus Powerloop bundle ​is now available in the areas that are served by UK Power Networks (East Anglia, Greater London and some Home Counties, plus Sussex and Kent); click here to check if you're in the right area.

So if you want to start saving the planet, and saving money on your transport, register your interest or get in touch today to chat through Powerloop. Just email hello@octopusev.com or give us a call on 020 3870 3892.

×Close window
Octopus Energy The only energy supplier Which? has recommended 5 years in a row Rated 5 / 5 based on 125898 reviews. | Review us