The price of progress: how we became addicted to fossil fuels

From smelting iron to lighting homes, fossil fuels have enabled some of humanity’s greatest social and technological changes. They fuelled the industrial revolution, helped win world wars, and revolutionised travel. They warmed our homes, cooked our food, and illuminated our streets.

But like all love affairs, it had to end. The relationship had become toxic, threatening to destroy everything we worked so hard to achieve. Every smouldering lump of coal, every flame of natural gas, every car engine brimming with petrol – it all added up to one thing: greenhouse gas. Specifically, carbon dioxide. And it’s been an impossible beast to tame.

In their natural state, fossil fuels are safe. They’re stable, trapped behind layers of rock or earth. Forcing our way into these vaults and burning what we find destroys millions of years of natural carbon sequestration. In fact, we release 25% more CO2 today (404 ppm) than the highest recorded output over the last 400,000 years (300 ppm) – and there are few signs of slowing.

All this extra CO2 traps heat in our atmosphere. In the last 100 years alone the planet has warmed by 0.7 degrees Celsius – much faster than the warming predicted by the declining ice age. 2015 was the warmest year on record, and scientists predict further warming of between 2 and 6 degrees Celsius over the next century.

This rampant heating creates havoc with our climate, weather, and ecosystems. And as we grapple with these potentially irreversible changes, there’s never been a better time to examine the roots of our obsession.

Fossil fuels have been around for ages. Some formed as far back as 650 million years ago, long before dinosaurs roamed the land. As their name suggests, they began as living things – plants and organisms – whose remains were buried under layers of sand, mud, and rock. Over millions of years, these remains were squeezed and heated by geological processes, until they transformed into the various fossil fuels we know today.

Sometimes, these fuels would seep to the surface where humans could find them – often with religious consequences. Historians suggest that the Pythia, also known as the Oracle at Delphi, was a victim of gas-induced hallucinations. Revered by the Ancient Greeks, the Pythia was a powerful priestess of Apollo who claimed to be inhabited by the god’s spirit during a special ritual of prophecy. One explanation is that the Pythia's visions were the result of gas leakage from nearby rock fissures, possibly methane or ethylene, which produced powerful hallucinations. 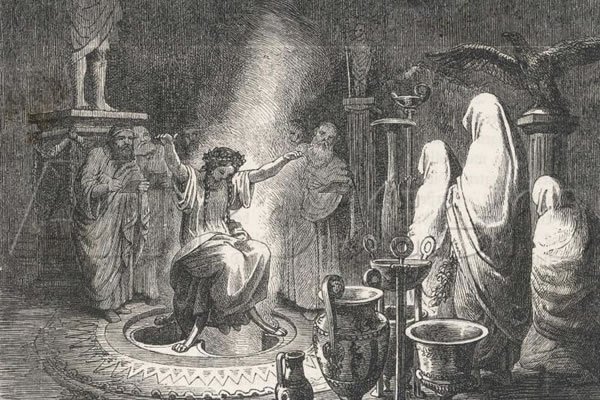 A depiction of The Pythia prophesising for her followers.

"But wouldn't the Oracle's followers have smelled the gas?" I hear you ask. Well, natural gas, which is mostly methane, is odourless and colourless – which is why gas companies add a smelling agent so we can detect leaks. Ethylene is also odourless and colourless. (Food fact: fruit releases ethylene as it ages, and is the culprit behind browning bananas.)

Another fossil fuel site with religious significance is the “Eternal Fire” at Baba Gurgur in Iraq. This naturally-occurring oilfield and gas vent is said to have been burning for 2,500 years (probably ignited by lightning). Local women would visit and pray on the gender of their children, and some believe it to be the same “fiery furnace” into which King Nebuchadnezzar threw three Hebrews in the Old Testament for refusing to worship his golden idol.

But ever resourceful and curious, humans found myriad practical uses for fossil fuels. Basic crude oil was used to fuel lamps as far back as the Bronze Age (and before). And bitumen, the tarry remains of crude after the lighter elements have evaporated, was used to caulk homes and boats, to galvanise tools and weapons, and for asphalting roads. The Egyptians even used it to mummify their dead. 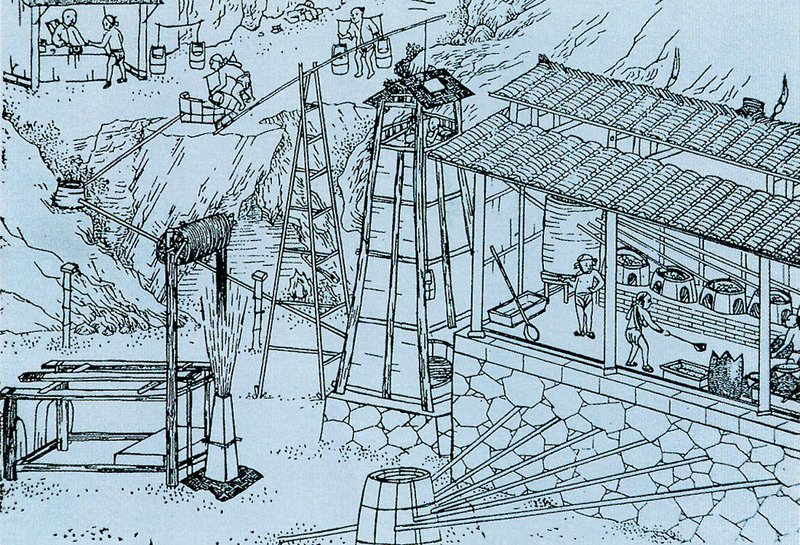 Around 500 BC, the Chinese used oil and gas to boil seawater to extract salt, a precious commodity at the time, which was used for both nutrition and preserving food. Using a rudimentary network of bamboo pipes, they transported the fuel to fires underneath vats of seawater. Further inland, they drilled for brine underground, and often found pockets of natural gas with which to boil what they found.

Oil, or "black gold" as it came to be known, really took off when several inquiring minds discovered you could refine oil by heating it. The process is called “cracking” for the way in which long-chain hydrocarbons present in crude are broken into smaller chains when heated, producing different oil-based products. As early as the mid-18th century, Russian scientists were distilling a kerosene-like product from crude to light churches and cathedrals across the country.

Then, in 1846, Canadian geologist Abraham Gesner obtained kerosene from bituminous coal and oil shale. Gesner’s fuel replaced whale oil, the dominant fuel at the time, since it was cheaper and easier to burn, thereby killing the North American whaling tradition for good. After all, there was much less risk (and cost) extracting oil from your backyard than harpooning Moby Dick in seas thousands of miles away. 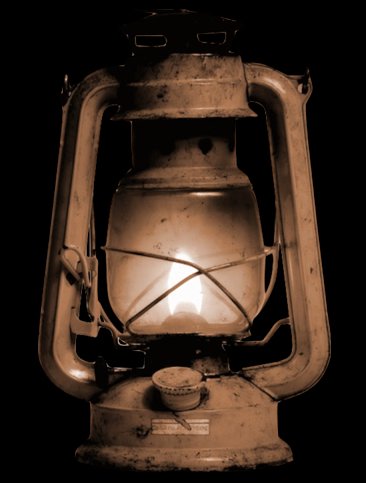 Another important figure in the history of kerosene is Ignacy Łukasiewicz, a Polish pharmacist, who distilled kerosene from seep oil. Łukasiewicz invented the first modern oil lamp in 1853, and turned kerosene into an extremely profitable business. Both Gesner and Łukasiewicz sparked the beginning of the modern petroleum industry, and before long, wells were sprouting all over the world.

Although coal had been used since 200 BCE by the Chinese, and by the Romans (it heated their baths, for example), demand soared during the Industrial Revolution. From 1760 to 1840, steam-driven innovation caused massive changes in transport (such as the locomotive), textiles, and manufacturing. All of it powered by the sooty stuff. 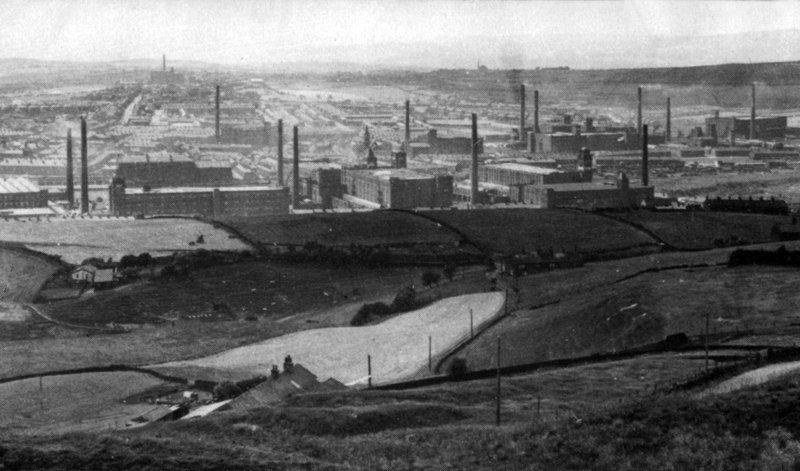 View of industrial mills and smokestacks in Greater Manchester during the late 19th century.

Coal-fired power stations supplied electricity to many homes and businesses of early twentieth-century Britain. And once the National Grid, begun in 1927 and completed in 1935, gave the necessary infrastructure to reach people on a larger scale, our demand for electricity – and the fossil fuels used to produce it – soared.

This huge leap in fossil-fuel-driven change, both at home and work, began to have very unpleasant effects. Noxious “pea-soupers” smothered London in the early twentieth century. This pervasive smog of soot and carbon dioxide caused great harm to the elderly, children, and those with respiratory problems, and was arguably the first sign that not all was well in the new age. The Great Smog of 1952 caused 12,000 deaths. The government's response was the Clean Air Act of 1956, which banned coal-burning in certain urban areas in an effort to clean the air, but it did little to solve the problem. 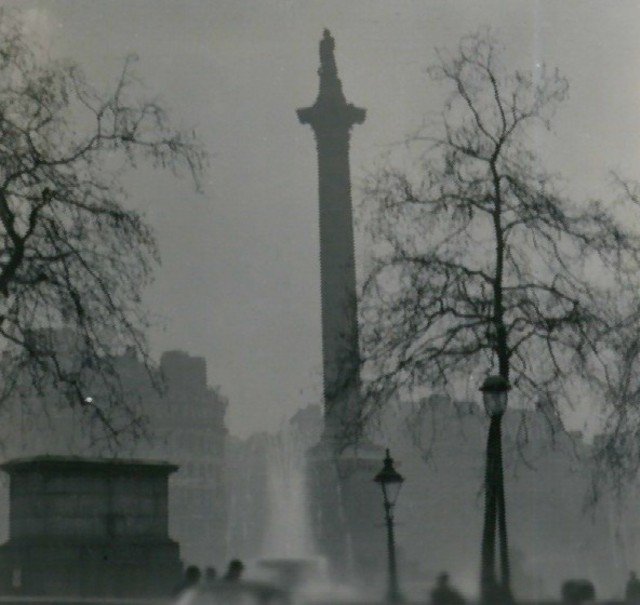 Nelson's column obscured by the Great Smog of 1952.

And there was a new polluter emerging: the motor car.

1908-1927 saw Henry Ford’s model T motor car, the first mass produced, affordable, personal vehicle, fly out of showrooms across the world. Ford manufactured 15 million of them over 19 years of manufacture. The new vehicle ran on gasoline, kerosene, or ethanol, and sparked the beginning of the personal transport boom. Although coal was the dominant fuel up until around 1960, demand for oil soared as vehicle ownership grew. Today, 76% of UK households own at least one car.

And although coal-fired electricity generation has fallen, over 40,000 people die each year as a result of pollution (Royal College of Physicians and the Royal College of Paediatrics and Child Health report February 2016). 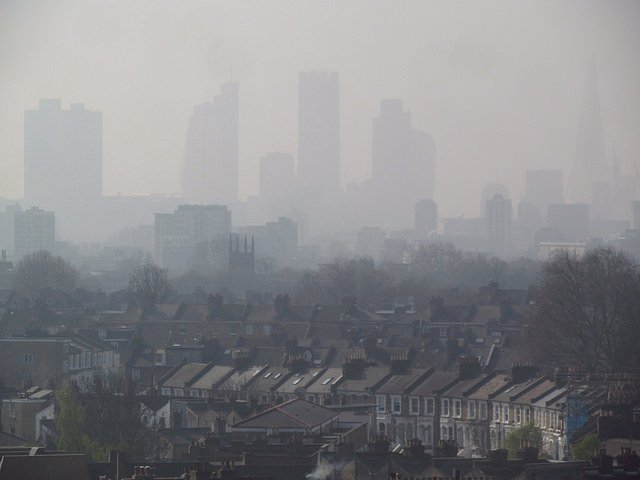 But the real cost of fossil fuels goes far beyond pollution...

The real price of progress:

As a species, we've made astounding changes to our lives in the last 150 years. We travel more, earn more, do more. All thanks to that ancient stuff we dug up from underground.

But you get nothing for nothing, as the saying goes...

Historically, the UK is the largest contributor of greenhouse gases, with the US and Germany not far behind. Nowadays, China has the highest output rate given its reliance on fossil-fuel-driven energy generation.

While CO² is normally regulated by natural cycles over millions of years, humans are tipping this fragile balance out of order. We emit billions of tonnes of CO² without removing any. Nature cannot balance the exponential rise of human-generated CO².

The answer lies in the consequences: 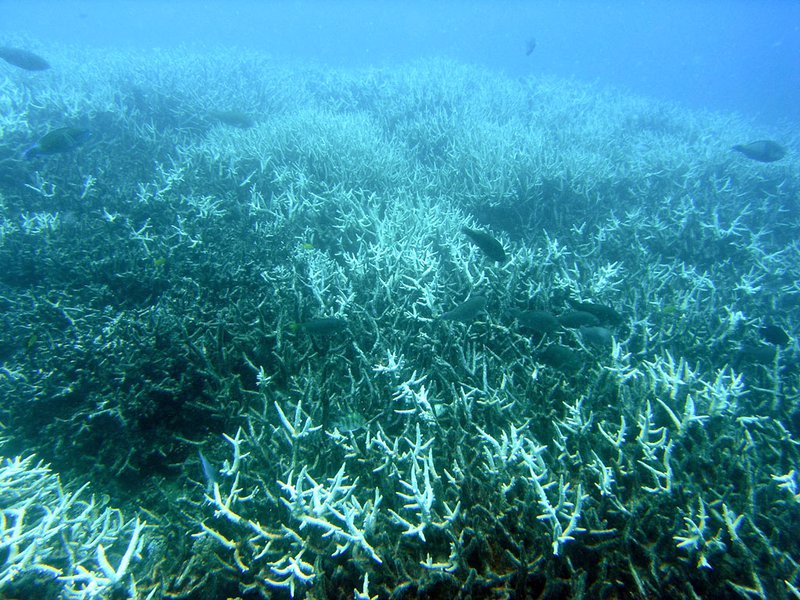 Coral bleaching in the Great Barrier Reef – a major cause of which is warming oceans.

This list isn't exhaustive, and we're already feeling the effects: global sea ice is shrinking, acidic seas are killing wildlife, droughts are getting worse, species are struggling to survive, and more of our land is turning into desert.

Which is why we want to help move the UK to renewables. We're working hard to raise awareness, to make renewable energy affordable and simple for everyone, and helping shape the legislation and technology that'll make the UK a leading renewable society.

The price of progress is steep: let's hope we can foot the bill.