Portraits from the Precipice: Meet the Artists

We wanted the eyes of the world on the climate crisis, so we launched the world’s largest open air art exhibition: Portraits from the Precipice.

Artists from around the world submitted artwork that answered one brief 'What does climate change mean to you?'.

The pieces were then showcased on billboards throughout the UK in a bid to inspire action on climate change through art. We recently revealed 'The Future's In our Hands!' by Zoe Elizabeth Norman as the winner at the prestigious Royal Academy of Arts!

You can meet some artists that made the shortlist below...

1st Place - Zoe Elizabeth Norman: The Future's In our Hands! 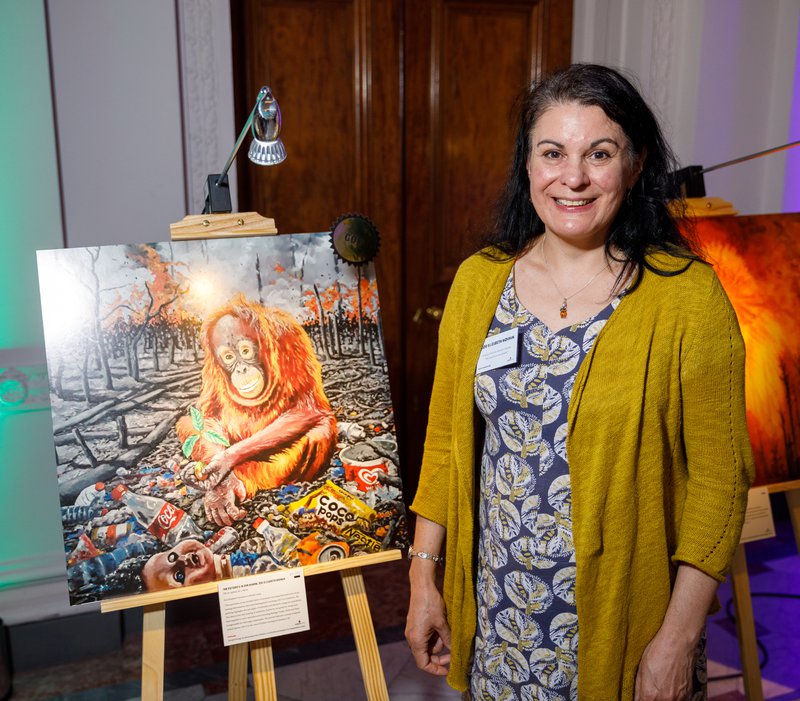 Zoe Elizabeth Norman experienced something of an artistic renaissance after moving to the countryside, outside Norwich, to start a family. Since then she has painted with watercolours and then oil paints. More recently, Norman has turned her attention to using art to render landscapes and environmental issues.

For this piece, the artist explains that the plight of our rainforests was of the utmost importance: ‘If I could raise awareness for the devastation being caused by our consumption of palm oil then might I even make a difference.’ A young orangutan, modelled on a real orangutan at Dudley Zoo, named Sprout, is central to The Future’s In Our Hands!. ‘To me, orangutans represent all that is good in this world. They appear gentle and wise, and they live in harmony with their surroundings. My orangutan is holding an Ironwood seedling. Ironwood is one of the largest and most ancient trees, vitally important to the rainforest ecosystem’. The rubbish around the subject ‘names and shames the worst culprits of rainforest destruction for the sake of palm oil.’ 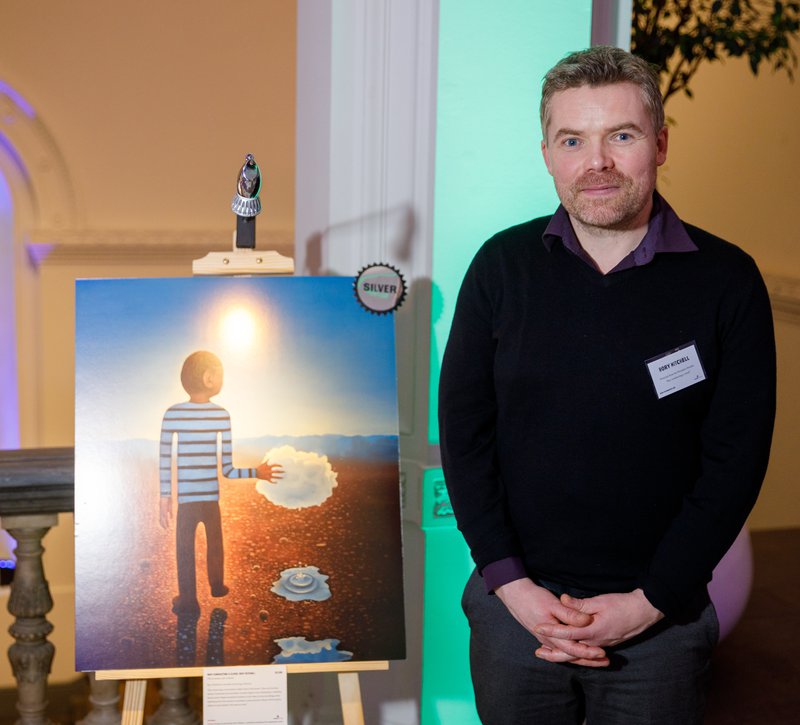 Born in Scotland, Rory Mitchell is currently based in Oslo, Norway. In 2019 he found that the issues surrounding global-warming were nearing the fore-front of his mind, and started thinking about the piece that gradually became ‘boy conducting a cloud’.

He explains that: ‘the theme is not just important - it may be the most important issue we now face. It appears many are waking up to the fragility of the Earth. On a personal note - I have a young daughter, and like many parents, I hope that when she is older, she will enjoy the world in a healthier condition.’

With that in mind, ‘Boy conducting a cloud paints a bleak vision of the future. There are, however, strains of optimism; the surrealistic narrative depicts a boy attempting to rehydrate barren lands. Despite humanity's tendency to lay waste to its surroundings, some individuals have the tenacity to contribute, create and solve. Nature will be heavily reliant on such people in the years to come.’

‘I find art to be both a beautiful and poetic way to communicate. It can describe the complexities of the climate crisis, convey visions of the future, and stimulate an immediate emotional and critical response. I find that I can say much more in a painting than I can with the spoken word. Mind you, that might be because of my Scottish accent.’ 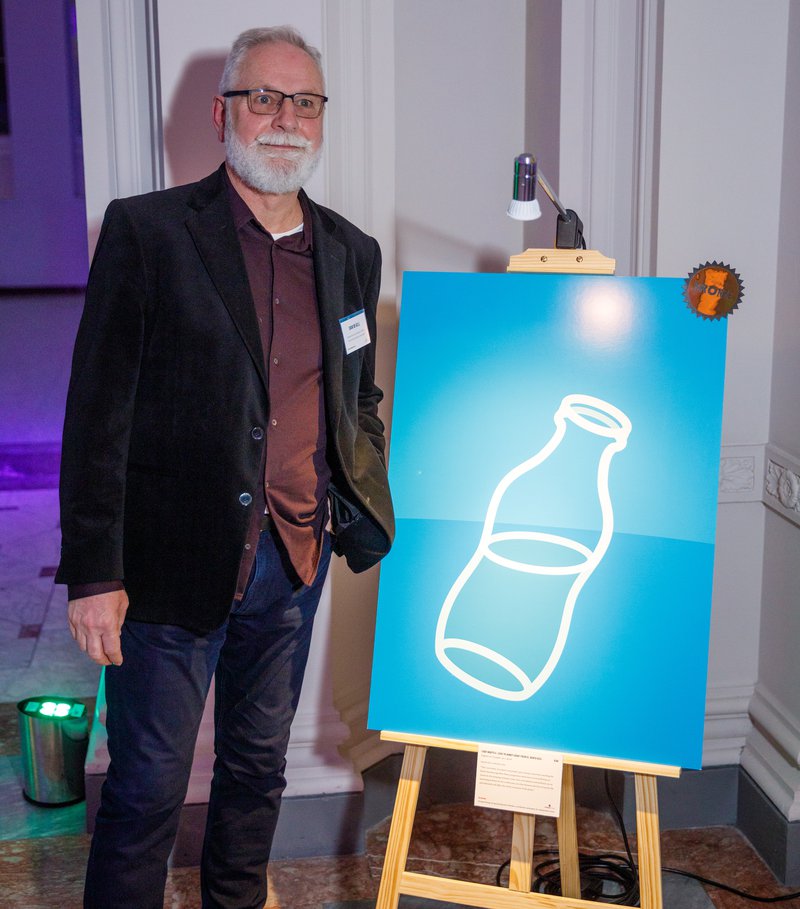 David Gill is an artist and designer based in the city of Chester. Gill explains that ‘having worked for many years teaching and lecturing on designing for our sustainable future, I wanted to produce a strong visual response. I’ve seen first hand through teaching art and design, the way in which art can change people's lives through participation, and how this participation is also capable of changing the way in which the wider community engages with the climate crisis.’

His 'Lost bottle, lost planet, lost people' print concept was inspired by David Attenborough’s Blue Planet, with its focus on how we are polluting our oceans by dumping plastic waste. ‘Microplastics and pollution are an increasingly devastating problem for the world's seas - one that threatens the lives of marine life and ultimately affects the ecosystem of the entire planet.

DB Waterman: IT SEEMED LIKE SUCH A GOOD IDEA 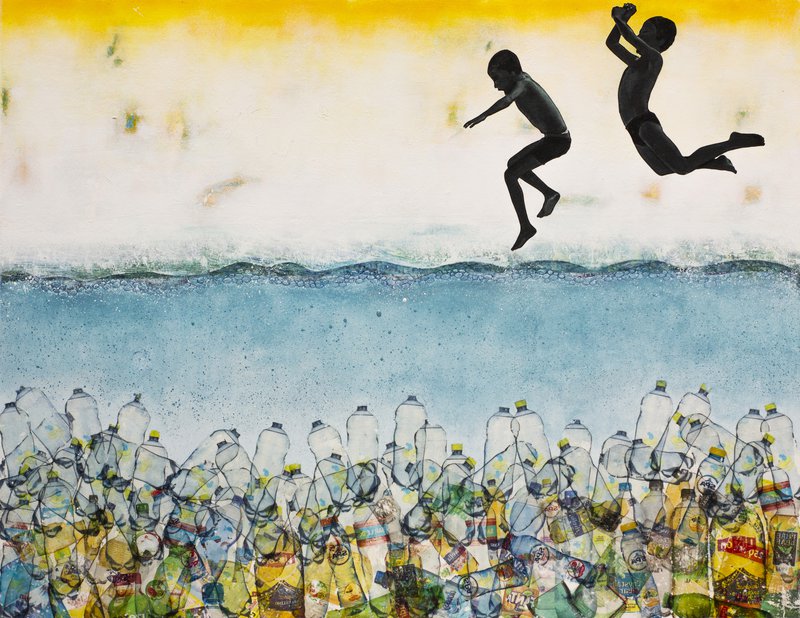 DB Waterman is a lifelong artist, currently working out of Eindhoven, in The Netherlands. Their work ‘explores the dissonance between old and new materials,’ which are then ‘intertwined in the most beautiful possible way to create dreamlike and melancholic images.’ The composition follows the same guidelines: ‘the creative objective of my work is to make something beautiful out of decay - the old and the new - it is never too late. Nothing is so broken that it can’t be fixed.’

IT SEEMED LIKE SUCH A GOOD IDEA was inspired, in part by the artist’s disgust at plastic packaging - ‘a once-in-a-lifetime handy invention has gotten out of hand’. Waterman also draws on the younger generations for inspiration: ‘Their ability to transcend any given rotten situation is astounding. Children play tag in the ruins of bombed out Syrian cities, and football in the most difficult neighborhoods - they are always looking for the light. They will save the future that our generations have messed up. If we only could keep the kid in ourselves a bit more alive, we wouldn’t be in such a mess.’ 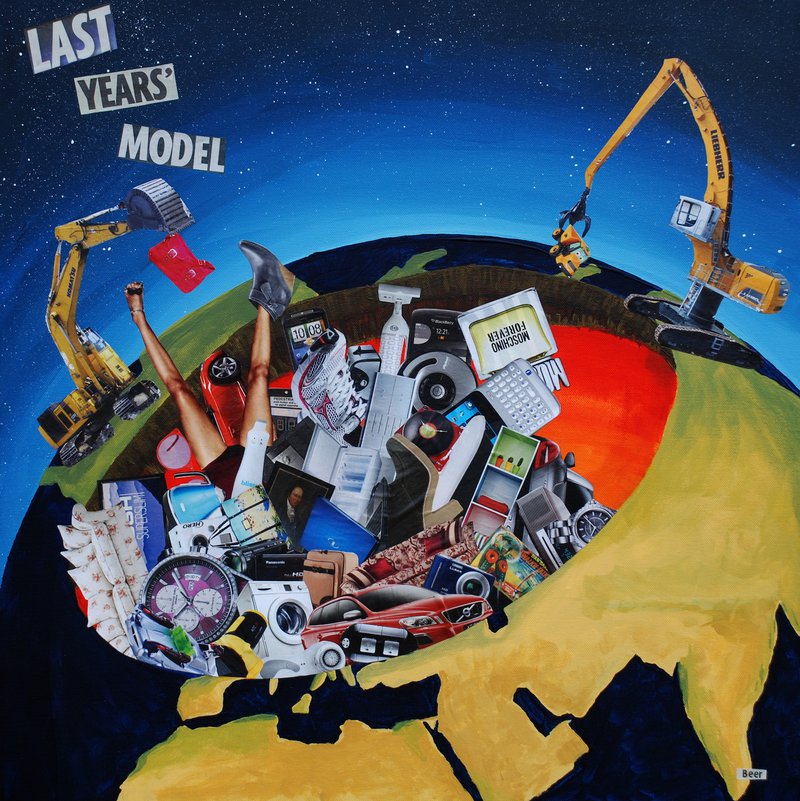 Stephen Beer is an artist based in Saltash, Cornwall. His art is often conceptual - ‘an outlet for ideas and thoughts’, bringing together a wide range of images, materials and mediums as he works out how best to express those concepts. Beer explains that his artistic process is rooted in childhood experience: he and his father would develop photographs together, and this dovetailed with a passion for ‘taking things apart and putting them back together again - old toys, radios, things like that’.

Not long afterwards, Beer began addressing environmental issues in his art. In that vein, Last Year's'Model ‘comments on the pressure advertising is putting people under - to replace products which have plenty of life left in them, as well as the way our society has been directed to disregard the value of ‘last years trend’. He explains that ‘unless you are up to date your life is lacking something. The by-product is waste, and that waste has to go somewhere; a lot of it ends up in landfill. I wanted to portray the Earth as a hollow vessel to emphasise that it only has a finite amount of space, and question what will happen once we have filled it up.’

When it comes to the power of art to tackle the climate crisis, Beer is emphatic: ‘As long as a piece of work gets the viewer's attention and creates interest then it can promote debate. In order to reach the highest audience the work needs to be in public places, not shut away in galleries, which a large number of people still don’t see as being for them.’

Jane Wilson: Swimming against the tide 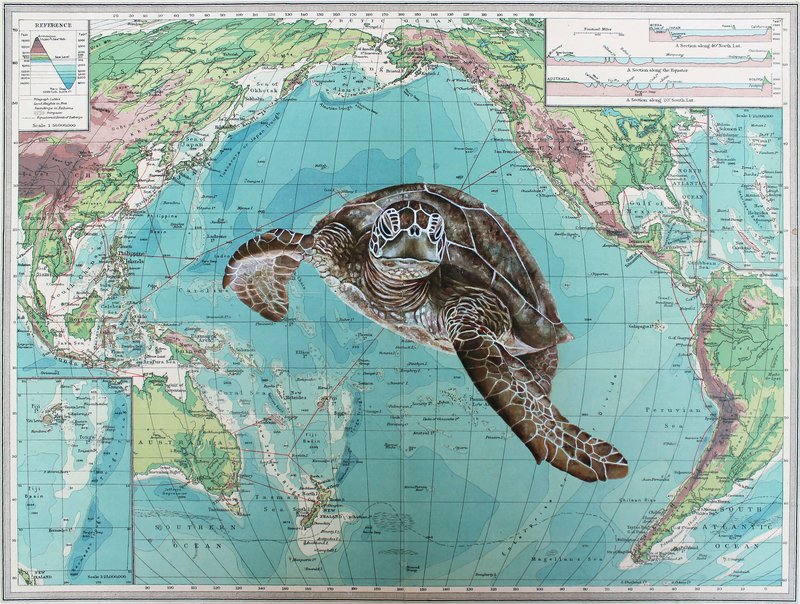 Jane Wilson is a mixed media artist from Beaconsfield, Buckinghamshire. Her process exemplifies the ethos behind her work: ‘most of the time I utilise items from my collection of otherwise unwanted ephemera, be it a map, book page, music or a combination - and give them a new lease of life.’

Wilson is best known for her cartography paintings ‘which combine vintage maps with animal portraiture, creating unique, contemporary artworks that aim to celebrate and promote awareness of conservation and other environmental issues.’ As seen in Swimming against the tide, her animal subjects are often endangered or facing challenges from loss of habitat or climate change.

‘I am passionate about the environment, but as individuals our actions are drops in the ocean. We need more companies to influence the government and provide individuals with real green choices. I would love a rail network that was efficient and affordable, safe cycle paths, and “future proofed” towns. I would love a world that valued it’s citizens; both humans, animals and plants, as much as it valued money and profit. In the face of all this, I do think artists have a responsibility to use their work for good.’ 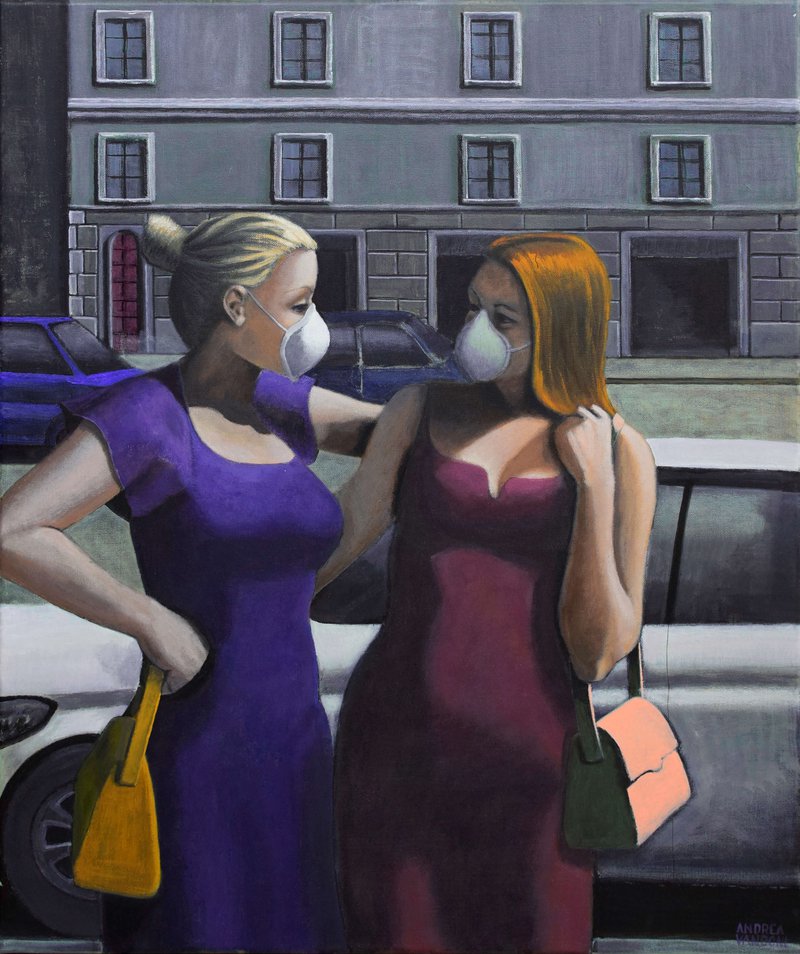 Andrea Vandoni works out of Novara, near Milan, in Italy. Her art has always had a strong narrative bent: ‘the narrative function of art is fundamental for me. It takes place through the meaning of my works, and through beauty. For me, "Meaning in beauty" is the goal that art must aim for - as meaning is enhanced by beauty.’

One narrative that Vandoni’s art has long focussed on is environmental degradation: ‘the environment has always been one of the main themes of my work, because I have always felt anguish about the loss, the destruction of beauty, and of our lives with it.’ Her piece for Portraits of the Precipice, Gas contrasts the beauty of its human subjects with ‘the consequences of our “civilization”, which deface it.’

Speaking on the relationship between art and the Environment, Vandoni explains that: what has increasingly anguished me is the fact that for a long time the theme of the environment was forgotten - a problem to be postponed continuously. And equally my paintings that spoke of it were archived as too sad. Now there is a new sensitivity, and this competition proves it.

Anita Kaufman: What can you do for the ocean? 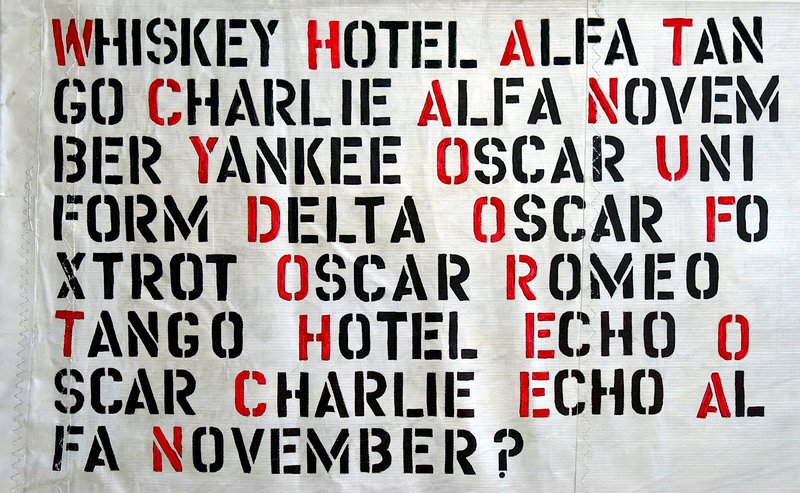 Anita Kaufman lives and paints on an island in the middle of the River Danube, near the medieval city of Regensburg - a Unesco World Heritage site. She became familiar with the changing climate when her family sailed around the world for 6 years between 2009 and 2015: ‘we saw pollution in the oceans, plastic everywhere on remote islands, and felt changes in the climate through increasingly powerful storms - but we were also able to experience the unlikely beauty of our planet every day.’

Kaufman explains that when it comes to art, she likes to work with people’s curiosity - ‘what's on the canvas? What are these disjointed words? Little by little the meaning becomes clear.’ By necessity, to experience What can you do for the ocean? the viewer must grasp the question and think about it.

‘The piece is written in ICAO-Alphabet, which is indispensable while sailing. It puts forwards a simple question, written on a part of the sail that brought us from Europe to the Pacific. While sailing from French-Polynesia to Hawaii a terrible storm tore it the sail apart. Because of the climate change sailing is less predictable - traditional routes are no longer generally valid. All of us should think about what we can do to stop climate change. The project is called: ‘Portraits from the Precipice’ and is what the sail stands for.