Meet Fiona Howarth and her team of EVangelists

Octopus Electric Vehicles, our fantastic sister company, is effectively a start-up within a start-up, racing ahead of the competition to bring electric transport to the people. Through simple, affordable car leasing and smart charging innovation, OEV are on a mission to make our society zero-carbon way ahead of government targets.

We wanted to introduce you to the Octopus Electric Vehicles team, headed up by CEO and electric transport pioneer Fiona Howarth.

Our writer Eugene chatted to Fiona about her journey to leading OEV's innovative electric transport change-makers.

Fiona recalls: “When I started my Highers [Scotland’s equivalent of A-levels], I had a conversation with my Physics teacher. I said that I was interested in electric cars since oil would run out one day and I wanted to look at how the motor industry might make use of renewable energy.” She was told that she should focus on fuel cell technology, and there her journey started.

Fiona was especially inspired by a project by the National Trust for Scotland, which was looking to renewable energy for Fair Isle, the most remote inhabited island in the UK. From a peak of 400 in 1900, it now has only 55 residents. There’s just one shop and no pubs or restaurants. It has changed hands between Scotland and Norway a number of times, and the National Trust bought it in 1954 to protect its marvellous wildlife – and began to consider the problem of providing energy to this remote rocky outcrop.

In fact, in October 2018 the National Trust announced that the community on Fair Isle were finally celebrating having 24-hour power for the first time after the switch-on of a new renewable system.

Said the Trust: “The three turbines, a ground-mounted solar system and a battery storage provide a reliable energy supply and are transforming the quality of life for the 55 residents of the island.”

A scholarship to Oxford followed, where Fiona studied Engineering, Economics and Management. From there she went to BMW to work in the fuel cell division, working on a hydrogen fuel cell for an auxiliary power unit, as part of a hydrogen car that used a combustion engine. She recalls: “It was crazy, really. The hydrogen was liquefied and stored at -253°, and there was the endless chicken and egg problem: what comes first - the hydrogen cars or the hydrogen filling stations?”

Through a sponsorship from the Royal Academy of Engineering, Fiona travelled all over the world, including Japan, to look at developments in electric transport.

I concluded that hydrogen fuel cells were a long way off, if ever, and that EVs, though they would come sooner, were still far away.

A five-year stint with a top-tier management consultancy firm saw Fiona working with a FTSE 100 energy company on a ten-year strategy review to inform global investment decisions. She worked with a Big Six energy supplier (we’re not telling who), advising on how to improve productivity among its 7,000-person workforce.

In early 2017, I drove my first pure electric vehicle and realised that, while I’d been doing other things, they’d become brilliant. Tesla had started to revolutionise our roads – just as Apple did with the iPhone.

“Sadly, when I tried to learn more and even to buy an EV at a car dealership, they shared false information about how long it would take to charge and the impacts of some tax-efficient schemes. They subsequently tried to steer me to a petrol car that was popular with families, and if I hadn’t been so committed to electric cars, I could easily have been put off.

“Since then, I’ve been building a team of experts passionate about helping consumers and businesses make that transition to electric vehicles (EVs). We’ve secured excellent leasing and outright purchase rates on leading EVs; we’ve created energy tariffs designed specifically for EV drivers; and have partnered with smart charging tech companies to enable customers to access the cheap energy rates with ease. In fact, some customers are saving over 90% on their fuel costs having switched away from fossil fuels to electric transport.

“In addition, the team is out with communities and businesses on a regular basis, helping customers think through what their life might be like with an EV, and enabling them to make the switch with confidence.”

Fiona has spent the past two years building a team of experts from across the auto industry and beyond. From Big Gas Guzzler defectors to environmental science whizzes to seasoned energy experts, this team lives and breathes EVs and they’re passionate about a world-wide electric takeover. 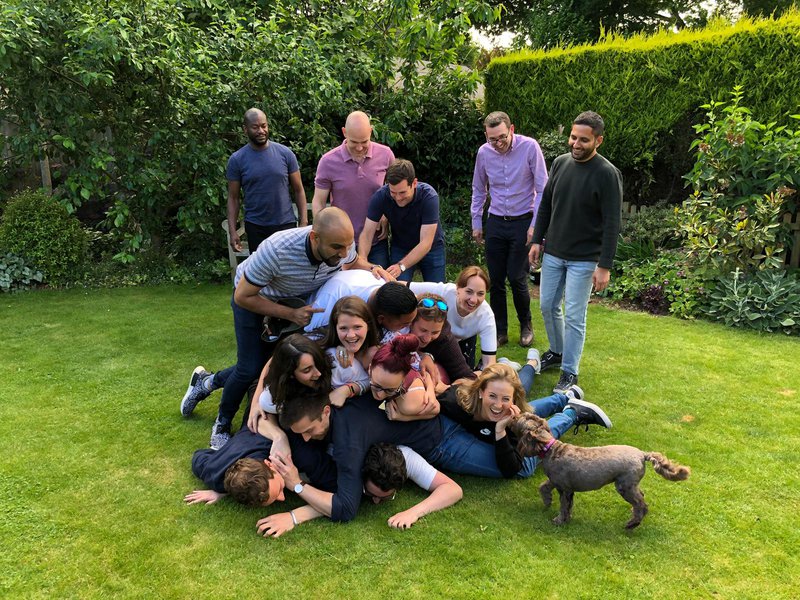 Here's a little about the team...

Gurjeet is the Director of Operations at Octopus Electric Vehicles. A grad from Oxford, Gurjeet worked with high-growth businesses as an investor and board member. Now he is thriving at Octopus Electric Vehicles and getting stuck into everything from running teams and processes, to helping customers get their first electric car. Known to the team as G, or GG, (or occasionally Papa GG), Gurjeet is a loveable germaphobe and local restaurant aficionado. One time, he ate an entire Pizza Pilgrims pizza in less than four minutes.

Alvin has been helping drivers find their new car for 13 years, most recently with Nissan as their Regional EV Manager. Alvin now heads up the consumer sales team at Octopus Electric Vehicles (known around the office as The Sugababes). In his spare time, he loves spending time with his wife and three kids. He also has a penchant for stylish clothes and shoes (he currently has approximately 30 pairs of trainers in circulation). Alvin has a guy for everything. No matter what you need, Alvin knows a guy.

Liberty runs the Manchester branch of Octopus Electric Vehicles, helping individuals, businesses and local authorities make the switch to help clean up local air quality. With a background in recruitment and sales, Liberty has a phenomenal knack for connecting with everyone she meets, and she works tirelessly to make electric cars work for every customer. She WILL call you babyhun, and you WILL like it. Alongside her day job, she is a lover of hip-hop, thought-provoking exhibitions and even made a documentary to raise awareness on what it is like to have Phenylketonuria (PKU), a rare but potentially serious inherited disorder that can significantly impact what you can and can’t eat.

Dinara is Octopus EV’s Event Manager. She is in charge of planning and executing business-to-business and business-to-consumers events across the full spectrum of markets in the UK. She recently masterminded Octopus Electric Vehicles’ participation in Robert Llewellyn’s Fully Charged LIVE, the UK’s biggest EV/cleantech event, which this year drew over 12,000 visitors. Dinara grew up in Russia and moved to Canada when she was 18. Dinara lives for wine – her favourite is Cabernet Sauvignon – and travelling (she’s been to about 20 countries in the last 12 months). For our last Secret Santa, she notably requested a custom T-shirt with her own face on it, so make of that what you will.

Shaun has been working in energy for years in almost every aspect of the business, not only for Octopus Energy but also some rivals we won’t name. Most recently, he's been on the front lines of the smart meter roll-out. Now, he’s moving into the world of EVs as an expert in smart charging solutions. He is the #1 guy on Project Powerloop, a £7m Innovate UK-funded study of domestic Vehicle-to-Grid charging. Shaun is passionate about driving change through technological innovation, and can’t think of a better place than Octopus to see that passion become a reality. His dark and twisted sense of humour is unparalleled, he makes a shocking cup of tea, and he’s been responsible for delivering some of the sickest burns in our Octopus Electric Vehicles Facebook comment wars with petrolheads.

Fun team, right? Get to know them a bit better while you're buying or leasing your dream electric car! Drop them a line to hello@octopusev.com or call 020 3870 3892.

×Close window
Octopus Energy The only energy supplier Which? has recommended 5 years in a row Rated 5 / 5 based on 115602 reviews. | Review us