The green credentials of electric transport

“They cause more pollution in production”

“The lithium batteries are worse than ‘normal’ car batteries”

Some of the many questions we often get asked are around how sustainable an electric car really is in comparison to a petrol or diesel vehicle. 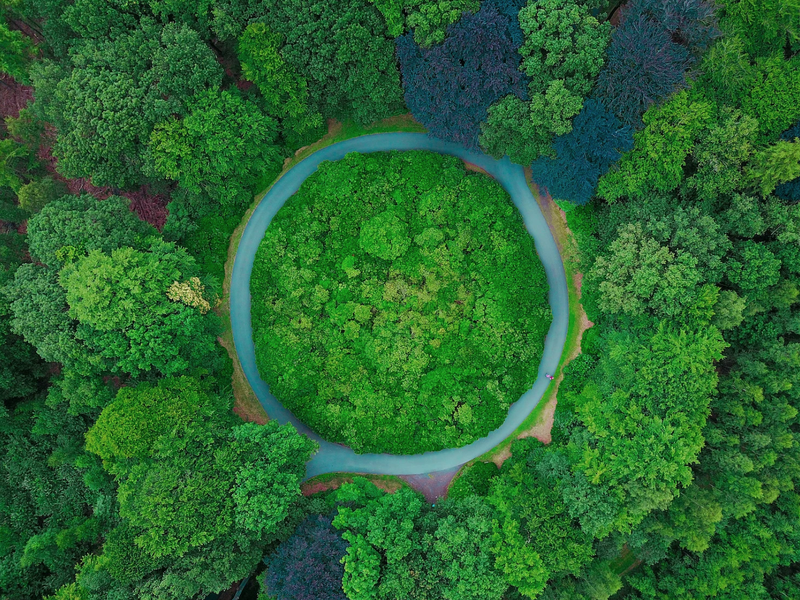 From an environmental point of view, we at Octopus only see the positives in electric vehicles: they emit far less harmful carbon emissions than a petrol or diesel car (exactly how much depends on how you drive, and how you charge up), because they run only on electricity (if you get that electricity from Octopus Energy, that’ll be only 100% renewable electricity). But some people don’t think like us.

There’s a lot of misinformation, confusion and vagueness at the heart of these questions; the anti-EV lobby is pretty loud. So we thought we’d try to address some of these questions in a fair, reasonable and level-headed way. Now, it’s pretty obvious that we’re passionately pro-EV, but we thought it necessary to provide our point of view on some of these points, as a counterbalance to this misinformation (read: to cut through the anti-EV dreck).

The argument we usually hear is that the manufacture of an electric vehicle uses more resources and more energy than a typical petrol or diesel car. So, while the ‘wheel to wheel’ (WTW) comparison comes out in favour of EVs, if you compare the entire lifecycle of the car including the battery, EVs come out worse. Not so.

The Union of Concerned Scientists (UCSUSA) ran a two-year study into this ‘lifecycle’ issue, and found that "battery electric cars generate half the emissions of the average comparable [gasoline] car, even when pollution from battery manufacturing is accounted for”. According to Transport & Environment, about a third of the emissions in an EV originate in the production of the vehicle compared to less than 10% for the diesel. The UCSUSA study showed that an EV created between 15% (for small cars) and 68% (for larger cars with long ranges) more emissions than an petrol equivalent during the manufacturing process. So - looking at the manufacturing process in isolation - it’s absolutely correct that an EV generates a higher CO2 than a petrol or diesel car. But then they get on the road.

On average, an electric vehicle will be responsible for lower total emissions within 18 months, and that difference will increase as time goes on, as Li-Ion battery recycling becomes more prevalent, and especially as (and when) the energy mix gets cleaner.

Lifetime carbon emissions – how much can you save?

Because electric cars are fueled by electricity from the National Grid, actual lifetime CO2 savings are pretty varied depending on the energy mix you’re consuming— I.e. the electricity ‘fuel mix’ of the country you’re in.

If we look at our European cousins there are a range of technologies used to power homes and businesses. So, in say, Sweden, you save a massive ~85% of CO2 over the lifetime of the car compared to driving a diesel car (including production & driving) because most power is generated by hydro-electric. In Poland, where most electricity comes from coal, you only save ~25%. So even when electricity is derived from predominantly dirty old coal, an electric car still has a reduced impact of around a quarter. The UK’s grid averaged 292 gCO2/kWh in 2017, which puts us next to Spain (~65% lower than diesel). This is already down from over 500 gCO2/kWh a few years ago and will keep falling as we keep cleaning up the grid. 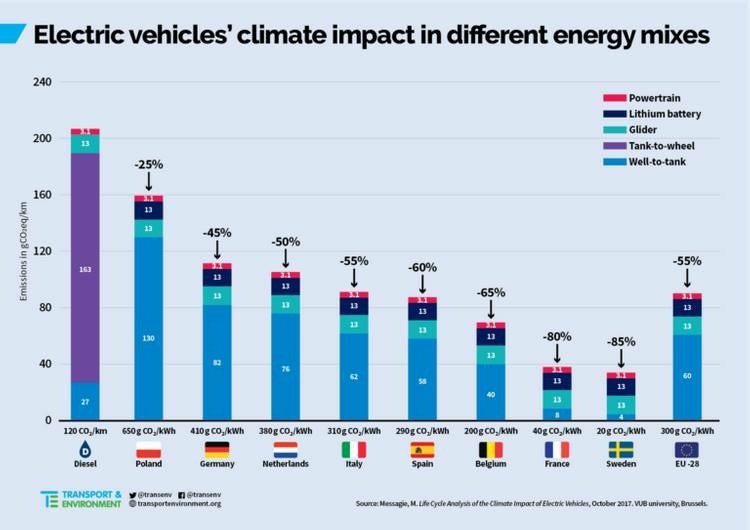 People can get hung up splitting hairs on CO2 emissions, but the massive carbon footprint reduction is only one of the benefits. The other big one is that electric cars emit no Nitrogen Oxide and Sulphur Oxide (NOx & SOx). These toxic particles are emitted in huge quantities by traditional cars and contribute to the air pollution responsible for roughly 40,000 premature deaths in the UK every year. EVs don’t emit any of this so you get 100% of this benefit by driving electric.Multiple studies have found that electric cars are more efficient, and therefore responsible for less greenhouse gas and other emissions than cars powered solely by internal combustion engines. An EU study based on expected performance in 2020 found that an electric car using electricity generated solely by an oil-fired power station would use only two-thirds of the energy of a petrol car travelling the same distance.

Let’s again compare the battery in an electric vehicle (Lithium-Ion), with a traditional lead-acid battery that you’d find in a petrol or diesel car. The stuff in the traditional battery is pretty toxic; at the end of its life it is designated as ‘hazardous waste’. But, on the plus side, recycling of these batteries is pretty common. Let us also not forget that the battery in a petrol/diesel car does a very specific job (to feed the starter); the battery on an EV does that job plus the job of the engine.

And in terms of performance of those batteries, they’re actually doing much better than expected. Take for example the famous Wizzy the Taxi that’s done more than 100,000 miles without losing a single bar of battery life. However, even when they do eventually degrade beyond usefulness in a car, they are being re-purposed for use for grid and home battery storage. It’s true that recycling Lithium-ion batteries is a challenge, but would you prefer to tackle climate change and air pollution in towns and cities? Recycling lead-acid batteries safely and in an environmentally friendly way was a challenge years ago but we cracked that. With the prevalence of Li-Ion batteries in pretty much all modern smartphones, we expect to be able to achieve the same levels of recycling — it will be big business after all!

Some argue that the UK’s National Grid wouldn’t be able cope with the increased electricity demand mass EV uptake would bring.To answer this one, let’s first look over to Germany, a very well developed country with a population 20 million larger than our own. They produce so much renewable energy, they can’t even use it all.

There was a 29 TWh increase from renewables in 2017. That growth is equivalent to around 5% of German power demand. If Germany were to continue to expand renewables at that rate, it would theoretically be 100% renewable in 20 years starting from zero. There is no reason why we cannot do the same. Sure, to some, nuclear is contentious, but it is also one of the more efficient ways of generating electric. Even if we don't use nuclear, it’s a fairly safe bet that the sun, wind, and waves aren't going anywhere any time soon.

In any case, technology like Vehicle to Grid will hopefully leverage the availability of easily accessible EV batteries, meaning charged-up electric vehicles could be used - in theory - to balance the grid on the fly, actually powering their owners’ homes when the Grid’s working overtime (For more information Vehicle to Grid, why not check out our Powerloop bundle?).

In summary, we’d like to take a less measured view. Electric vehicles are a step. A big step. A big step in the right (and only) direction. They’re cleaner and they’re greener. If you look at their lifetime CO2 impact they’re not perfect. But they are - categorically, based on scientific evidence - a more environmentally beneficial option than diesel or petrol cars. 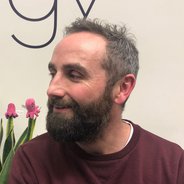