Back to Black Friday - Competition Winners

If you were an Octopus Energy customer back in November 2018 you might remember the huge Black Friday competition with prizes of a Tesla Model X, a Jaguar I-PACE, a BMW i3, a Nissan LEAF, two e-bikes and two e-scooters.

Now all the prizes have been safely handed over with no drama, I can confess that I'm responsible for much of Octopus’ online promotion, including this competition. You can watch the winners' reactions to receiving their brand new electric cars below.

the cost of this seemingly extravagant prize? Equivalent of giving every customer 29p

Rather than just write a blog listing the winners, I really wanted to write an open reflection on what has been both mine and Octopus Energy’s biggest promotion.

This smorgasbord of zero-emission cars came from our buddies at Octopus Electric Vehicles. (If you’re interested in experiencing what it’s like to drive an EV, check them out. You can find out if they're doing free test drives in your area on their social media).

The biggest question I get asked about giving away brand new electric cars (and understandably so) is, what's the cost of this seemingly extravagant prize? The answer – equivalent of giving every customer just 29p (which we offered to anyone who didn't want to play). A small cost to kick-start and accelerate conversations about zero emissions and a carbon free future.

We’re only at the start, as a population, of a huge movement towards a zero carbon future. You’ll have seen the bold actions taken by individuals all over the news in the past few months as well as David Attenborough's plea, alongside his harrowing demonstrations of the drastic impact we have on the planet, to make changes that will stop the effects of climate change.

We’re at the start of a huge movement towards a zero carbon future.

Now, it’s the UK’s businesses that need to step up and take action to make a tangible difference and Octopus Energy want to help lead the way. Electric transport is a non-negotiable part of our transition from fossil fuel dependence, and, while more and more people are acting in the interest of the planet, EVs simply aren't on most people’s radars yet. I wouldn't ask everyone with a petrol/diesel car to cash it in and buy a brand new electric car, especially since all the cars I've ever owned have been second hand. But, for all the people out there who are buying brand new cars it's worth thinking about, and manufacturers of all car brands need to be ramping up the market for electric cars.

My hope for this competition was to make these cars (often shrouded in misinformation, or seen as the stuff of tech boffins or Hollywood elites) accessible to people who might not have given them a second thought, and escalating conversations about EVs and a zero carbon future.

The competition got off to a rocketing start. An energy supplier actually giving something away to their customers instead of ripping them off is (sadly) such a novel thing that the competition made national news, propelling conversations about greener transport.

I asked if we could give away a car, the surprising answer was ‘surely it makes more sense to give away 8?'

I’m immensely proud to be working with people who say they are committed to a zero carbon future – and then actually follow through on those promises. Whether it’s promoting electric transport, ensuring 100% of the electricity they supply comes from renewable sources or planting trees with schools and local communities up and down the country (read what we've done in the tree planting space here).

I thought asking Greg, who buoyantly runs the joint, to give all our current customers the chance to win something incredible, would be a tough sell. It’s been a fight, in past jobs, to get over unnecessary bureaucracy and slow processes that result in huge compromises, bruised morale and a below-par experience for customers. It’s incredibly refreshing from an employee point of view, that when I asked if we could give away a car to one of our customers the surprising and immediate answer was ‘surely it makes more sense to give away 8?'

We knew that we wanted to do something to encourage customers to share the message of cheap, green energy to friends and family. But we never want our initiatives for new customers to leave our existing customers out. We needed extra prizes so that we could include all our customers, old and new. And, we needed a fair way to ensure every customer had a chance to win – so our fave tech guys whipped up a digital tombola to draw lucky winners at random, as well as a refer-a-friend "league table" so competitors could see just how close they were to bagging themselves a car. Check out our Head of front-end development, Ash, drawing the winners here. This stuff is important to us. We really do always try to ensure existing customers benefit too.

After a chat with the rest of the team to work out what we could actually give away, we decided four cars would do the job – plus, four more cool electric "vehicles" – bikes and scooters.

And so, the Black Friday competition 2018 was born. Everyone jumped on board to raise awareness and help see it through. After just a few weeks of planning, thousands of customers began spreading the word about green energy for the chance to win a low-emissions electric car. It sounds like a happy-ever-after, but watch this space. We're only just warming up...

Here are our winners:

Winner of a Nissan LEAF, the UK’s favourite electric vehicle, was John from Kent.

To keep things as fair as possible, our competition had eight prizes, and two ways to win: a league table, with the three top customer referrers getting first pick of the prizes; and a random draw for the remaining five prizes into which every single Octopus customer was entered.

John was the random draw winner of a Nissan LEAF! This man had been a happy customer for two years after deciding to give us a try as his energy supplier. One day he picked up the phone to the news he’d won himself a brand new car.

I'm pretty sure John didn’t believe the LEAF was real for a good few weeks...

The winner of Jaguar's first EV, the Jaguar I-PACE, was Mo from Middlesbrough.

Unlike other winners of the referral competition, Mo didn't call on his social media following for help. He called on his landlord friend to help him network with property owners and asked them all to hook up to a green energy supplier.

Mo couldn't wait to take his family for a spin in his new 'futuristic car'.

See the look on his face when he sees the car for the first time here:

Mo collects his Jaguar I-PACE from the local Jaguar dealership.

Maria referred more people to Octopus than anyone in the competition and got to choose her prize first – claiming her dream car, the Tesla Model X...

Octopus' wonderful Becca delivered the Model X to Maria’s home in Derby. See how the handover went down...

Maria has been a customer since we were a tiny fledgling business. Customer number six-thousand-and-something out of the more than 650,000 we’re privileged to serve now, she's been with us longer than 98.5% of all of our customers and we’re really pleased that the top prize has gone to someone who's been such a great customer for so long.

Nick is, (he won’t mind us saying) a massive electric car geek. He’s been a customer since mid 2018 and is always hot on the latest Agile/electric car-related products we offer.

So, of COURSE he was one of the most enthusiastic players in our referral competition, an early heavy hitter after referring his whole family to Octopus. After a lot of twittering and spreading the Octopus word, he came in third in the league table and picked the BMW i3.

Recently married Nick uncovers his BMW i3 with his wife

You'll get a heads up when our next competitions are happening – it's just around the corner – and who knows, you might be one of the winners championing a greener future and driving around in a brand new eco-friendly car. 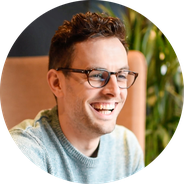