This comes as the energy regulator Ofgem has decided to conduct further analysis on the best way to protect customer balances and improve the resilience of energy retailers.

Since the start of the energy crisis in September last year, 29 energy suppliers have exited the UK energy market due to insufficient hedging and poor management.

According to Octopus Energy, ringfencing customer balances is an inadequate measure to tackle the causes and costs of supplier failure. The company’s research shows that it would do nothing to fix the major causes of failure whilst increasing the pressure on consumers by adding up to £30 to customer bills every year* and would increase supplier profits.

Instead, Octopus favours an insurance protection policy for credit balances, comparable to the kind provided to holidaymakers (ATOL) and FSCS used to protect bank deposits. Detailed analysis by Octopus shows that this would see greater protection for energy customers but cost 5-10 times less than ringfencing proposals.

The company is also calling for stringent rules on hedging and management of energy retailers to improve the resilience of companies and build a sustainable and healthy market. According to Ofgem, lack of hedging was by far the greatest cause of company failure, and responsible for 85% of the cost of failure, whilst credit balances only added 5%.

Since launching to the market in 2016, Octopus has raised over £1bn of investment from some of the world's leading funds and energy companies, which the company has used to build technology that reduces system costs and consumer bills. Last Winter Octopus funded customer debit balances of £670m and its customers are in net debit 9 months of the year.

“It'd be bonkers to raise customer prices and increase supplier profits when much cheaper alternatives would be at least as effective in protecting customers' money.

“Crude ringfencing is financially illiterate, which is why it’s not used in other industries. Its proponents need to be honest that it would cost customers a lot more than it saves, and would actually drive up supplier profits.

“The regulator should resist pressure from companies to adopt ill-considered ideas which would make the crisis worse for customers and more profitable for suppliers.

“Octopus wants to see much more stringent measures which don’t add to bills or profits. An ATOL-style insurance for customer balances, strict controls on hedging and management requirements would cost customers 5-10 times less than ringfencing and wouldn’t add to supplier profits.” 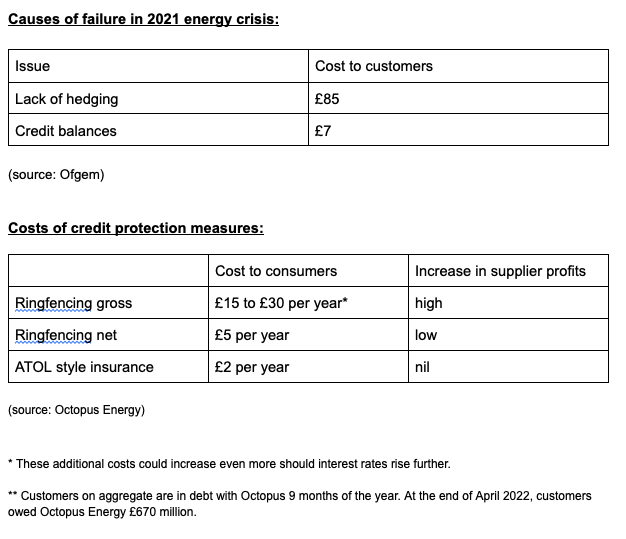