IONITY, one of the fastest EV charging networks in the world, is now available within Octopus Energy’s Electric Juice Network 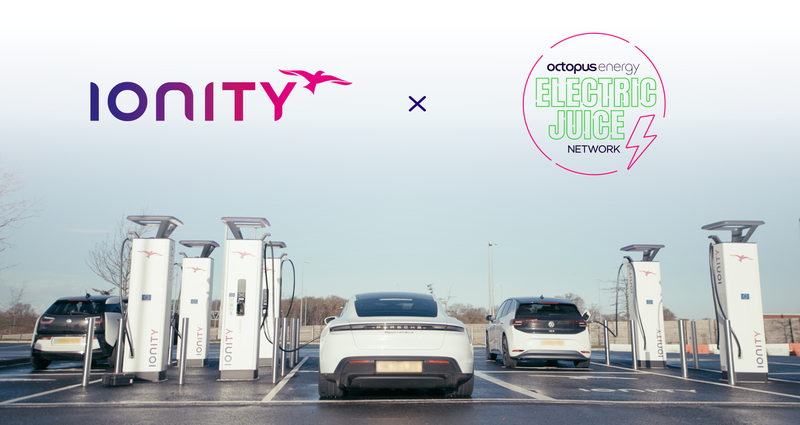 London, March 3rd 2021 - EnTech pioneer Octopus Energy adds IONITY - one of the UK’s most popular high-power charging networks - to its innovative Electric Juice Network (EJN) in a bid to simplify electric vehicle (EV) charging throughout the UK and Europe.

IONITY’s addition to the EJN has long been requested by customers and bolsters its capabilities for customers travelling long distances as it adds a number of 350kW ultra-rapid chargers in key motorway service stations across the UK, as well as 335 charging locations across 24 countries to the EJN.

IONITY uses the Combined Charging System (CCS) - the most widespread European charging standard for current or future generations of electric vehicles, regardless of car brand. The charger automatically optimises its charging power to the maximum a specific model can handle, therefore always providing the fastest charging experience possible. IONITY’s ultra-rapid chargers can charge an EV with a 50 kWh battery, such as a standard range Tesla Model 3 from 20% to 80% in less than ten minutes.

The addition of the rapid charging network also opens the door to mainland Europe for the EJN, which Octopus Energy will be opening to its European customers. IONITY’s home country Germany - where Octopus Energy recently set up an international office - will be the second country to benefit from easier EV charging all in one simple bill.

All of IONITY’s high-power charging stations in the UK are also powered by Octopus’s 100% renewable energy, meaning drivers can have peace of mind about the electricity being used to charge their car.

Drivers of electric vehicles will now be able to pay with their Octopus Energy account across the participating charging networks, with all costs appearing on a single bill. As further networks are added to the roaming service, users of the Electric Juice Network will soon be able to access many more charging stations nationwide.

With this ‘one-stop shop’ Octopus offers a solution to a long-standing problem for EV drivers, who have criticised the lack of a standardised way of paying as each network requires a different card or app. The service is open to all drivers of electric cars so that everyone can benefit from this new and more convenient way of charging - whether or not they are already one of Octopus Energy’s two million customers.*

Pia Bretschneider, Country Manager, UK & Ireland at IONITY, comments:
“Next to the development of a reliable high-power charging network, easy access and a comfortable charging experience play a big role in the adaptation of e-mobility. We are therefore very pleased about the partnership with Electric Juice Network and their decision to offer their customers access to our high-power charging network. With this we can contribute to promoting greener transportation in the UK and increase the number of electric cars in the country”

“Transport is responsible for a third of all carbon emissions in the UK, so decarbonising our roads is a huge step we need to take in the race to net zero. More partners coming on board to EJN makes it easier for petrol car drivers to consider electric vehicles and simplifies the whole process for current EV drivers.

Ionity charging times illustrated below in comparison to other modes of charging: 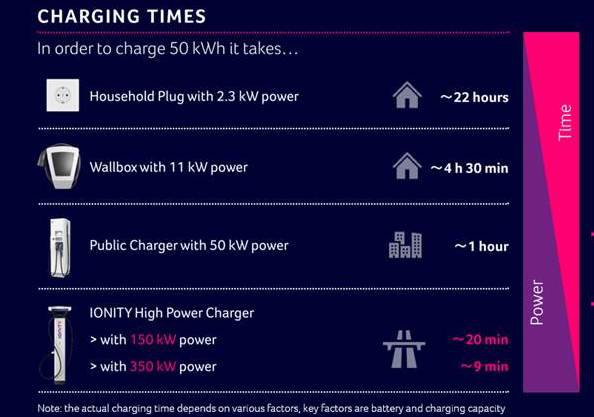 Launched in Summer 2020, the Electric Juice Network (EJN) was Octopus Energy’s answer to the frequent complaint that Electric Vehicle (EV) drivers were struggling with accessing the many different brands of EV charging stations through a plethora of cards & apps. EJN consolidates all payment and access needs through one simple card and login.

EV drivers across the country can now access over 1,500 different charge points with their card and have all charging added on to their monthly energy bill, if they’re with Octopus Energy, or with a single payment method. In its first six months EJN has taken on six new partners including Char.gy and Osprey (formerly Engenie) and won ‘Best EV Innovation’ at Driving Electric Awards 2021.

The company builds and operates a high-power charging (HPC) network along Europe's highways, using state-of-the-art technology with a charging capacity of up to 350 kW. By doing so drivers of current and future generations of electric vehicles - using the leading European charging standard CCS (Combined Charging System) - benefit from maximum charging speeds while taking a break on their journey. Every IONITY charging station consists of an average of four charging points. As a commitment to sustainability, all IONITY chargers deliver 100% renewable energy for both emission-free and carbon neutral driving.

IONITY was founded in 2017 and is a joint venture by BMW Group, Mercedes Benz AG, Ford Motor Company, Hyundai Motor Group and the Volkswagen Group with Audi and Porsche. More than 75 employees are shaping the future of e-Mobility at IONITY. The company is headquartered in Munich with an additional office in Oslo, Norway. IONITY is an internationally registered trademark.