Had trouble getting hold of your energy supplier recently?

Not if you're with Octopus Energy. Right now, it’s more important than ever to have reliable power, and customer service you can trust if anything does go wrong.

Our research showed that at the start of lockdown, all the other large** domestic energy suppliers stopped taking calls, as usual, with some suppliers warning that they'd terminate calls from customers about anything other than "emergencies".

Apart from us. Thanks to our tech, and our awesome team, we continued to be the only large domestic energy company answering calls as usual.

Our unique tech means our team can deliver award-winning service, no matter where they are.

- The Octopus Energy team working for our customers as usual.

All our energy specialists need to work are a laptop, a headset, and decent Wifi. Since the outbreak started, we’ve gone fully remote, but maintained the excellent service that got us our Which? Recommended Provider award three years running.

Since we transitioned to working from home, our service levels have remained basically the same. While our research showed other major suppliers took fewer than half the calls they were before, we always aimed to take 100%. We’re currently picking up the phone in less than a minute on average, and we aim to reply to emails in a few hours.

So, whatever you need help with, put us to the test! Just forgive us if you hear the odd dog barking or baby playing in the background.

We do energy better – for your wallet, and for the planet

Octopus Energy was launched in 2016 with a vision of making the green energy revolution affordable. We supply 100% renewable electricity to 1.5 million households around the UK.

We’re committed to fair pricing for the long term, and excellent customer support. As well as being the only Which? Recommended energy supplier three years running, we’re uSwitch’s Supplier of the Year for 2020, and we’ve got an excellent 4.8/5 Trustpilot rating based on over 24,000 customer reviews.

If you want to give us a try, switching is super easy and only takes a couple of minutes. We’ll handle everything (even telling your old supplier) and you won’t go off supply. Plus, we don’t do exit fees – so if you ever change your mind, you can switch away with zero penalties.

Our eight-tentacled friends are renowned for being flexible. They can manipulate their bodies to assume a mind boggling array of shapes and squeeze into cracks and crevices of almost any size. They’re a great evolutionary success story, having adapted to changing environments over millions of years. This adaptability was one of the reasons we were called Octopus Energy.

The current situation is not a challenge we’d expected, but we’ve always focused on robustness through autonomy, and resilience through diversity.

Perhaps the only creatures on the planet more versatile than Octopuses are people. Our people are bonded by a company culture of personal accountability and autonomy – and in the face of unprecedented circumstances, they’ve adapted and thrived in order to keep looking after customers. By building technology and an environment which embraces the creativity, smartness and commitment of our people, we’re confident that our philosophy will help in this crisis.

They analysed the number of calls that were handled by operators versus those that used recorded messaging asking customers to hang up unless it was an emergency.

Percentage of calls to Energy Companies answered by a staff member: 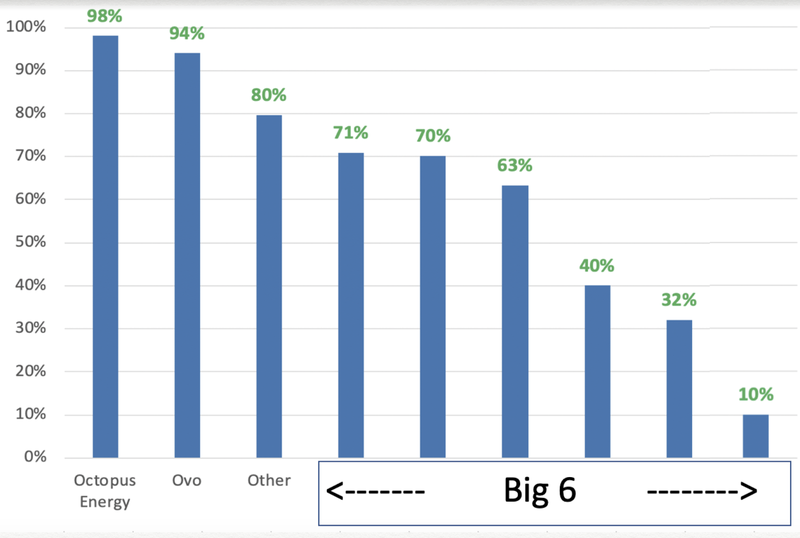 ×Close window
Octopus Energy The only energy supplier Which? has recommended 5 years in a row Rated 5 / 5 based on 119990 reviews. | Review us