Local wind power is the future, and we’re bringing it to communities across the UK via the Octopus Fan Club. Thousands of people around the country have told us they want a Fan Club in their community – and it’s no wonder. Abundant, locally generated green electrons make everyone’s power cheaper – and could cut your bills by as much as £350 a year.

Explore our new Fan Page to find out

The Fan Page is a new dashboard bringing blow-by-blow data about our Fan Club turbines to the public. Anyone can see wind speed, wind direction, rotor speed, generating output, local weather and weather forecast in real time – as well as exactly when the windy day discount kicks in. 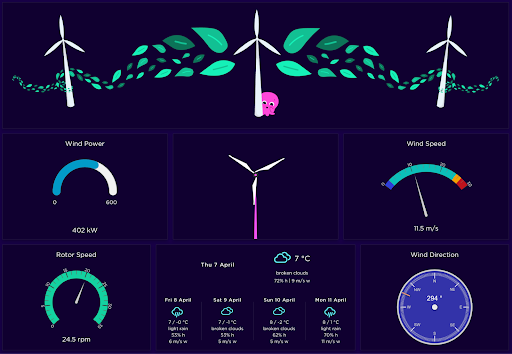 My geeky team and I are always looking for interesting ways to help more people visualise our green energy revolution(s), and we’ve recently turned our tech-spertise towards our very own ‘Fan Club’ turbines: Number 1 Fan and Number 2 Fan. Fan Club - the very first project of its kind - gives communities in Wales and North Yorkshire a chance to invest in local green generation and cheaper energy when their wind turbines are turning.

With 1,200 communities asking to get involved (and counting) and Fan Club receiving heaps of media attention, we thought we’d make a tool to help both curious onlookers and Fan Club members better understand their fabulous turbines.

Wind energy - now easier to understand than ever

In the spirit of transparency, curiosity, and blade-velocity (and obviously helping Fan Club members better understand what’s going on with their local turbines) we’ve decided to make a whole bunch of interesting data from local wind generators totally public. Now you can track wind speed, wind direction, rotor speed, generating output, local weather and weather forecast in real time! For fun, we’ve even calculated the speed you would be travelling at if you sat on the tip of the blade (which is typically over 100mph on an average day).

If you're one of our Fan Club members, we’re hoping that seeing what your turbine is up to in real time helps give you a greater sense of ownership. But that’s not all! As clean, green, generators continue to transform the UK’s energy system, we want to help people everywhere understand what local wind could mean for them.

So just how much energy do our Fan Club turbines generate?

Our two Fan Club turbines, in North Yorkshire and South Wales are able to produce up to 550kW and 480kW of electricity respectively. This means that at any given moment, each turbine can power around 400 to 500 homes (if on average each is drawing 1kW) or 200 to 250 kettles (most kettles are rated around 2kW). 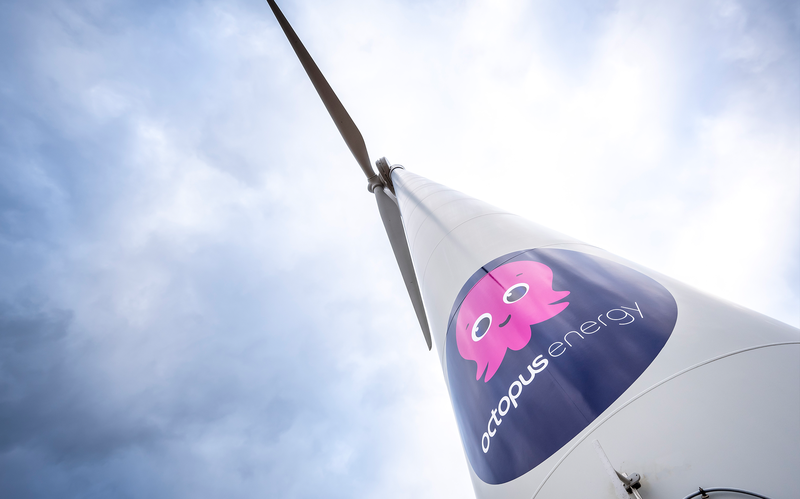 Fan Club customers can see this in real time; over a period of just a few minutes on a fairly windy day the output can swing between 300kW and 400kW.  It works the same way for solar fields too. On a sunny day, output can change rapidly, deviating by 25% or more, as a cloud blocks the sun, for example.

How do we work out when it's windy enough for discount energy?

Fan Club customers also get these groovy graphs where they can track their local wind generator’s activity (below is the South Wales turbine in March 2022) and even download average half-hourly data too. This allows members to see when these turbines were spinning fast enough to activate the 20-50% energy discount, what their homes’ consumption was during those periods, and how much they saved.

These graphics are put together from data received around every minute or so. Given that wind speed varies wildly minute to minute, we calculate the average wind speed across each 30 minute period to determine whether it meets the threshold for either discount.

What’s coming up next?

At the moment, we’re thinking about how to make a forecast work - we want to be able to tell people roughly when they can expect discounted power so they can plan their energy use to match.

Alexa, do I get a Fan Club discount today?

We’ve created some other nifty features too. One of the first things my team and I delivered was linking up our IFTTT and Alexa services to both our Agile import and export tariffs and the National Grid, grid carbon intensity. We’ve now updated those services to connect to the Fan Club too so, for example, you can now tell Alexa to ‘ask Octopus when I last got a Fan Club discount’ or to ‘ask Octopus whether I am likely to get a Fan Club discount today.

If you’d like to check out our real time Fan Club data it’s completely public here. You can find out more about Fan Club on our dedicated Fan Club Hub, and if you'd like to see Octopus Fan Club launch in your area, why not add your details to our Fan Club waiting list.

×Close window
Octopus Energy The only energy supplier Which? has recommended 5 years in a row Rated 5 / 5 based on 120635 reviews. | Review us